An Overview of OAEs and Normative Data for DPOAEs 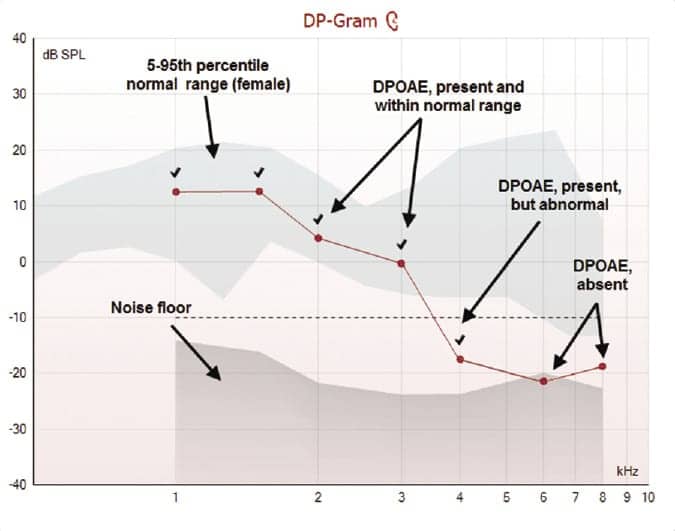 A review of OAE concepts, the application of screening versus diagnostic OAEs, as well as normative data to help clinicians in the interpretation of DPOAEs for the Interacoustics Titan DPOAE440 module.

Otoacoustic emissions (OAEs) were first reported by Kemp.1 In brief, as sound is introduced within a healthy (ie, normal hearing and functioning) cochlea, the stereocilia of the outer hair cells are stimulated. In response to stimulation, the outer hair cells change their shape to preferentially amplify and propagate particular sounds along the basilar membrane. This process is referred to as an electromotile response. In mammals, the electromotile response occurs essentially from the conversion of electrical energy into mechanical energy.2

OAEs may therefore be considered acoustic sounds that originate secondary to movement of the cochlea’s hair cells. These acoustic sounds from the cochlea can be measured from  the external auditory canal, given a clean and healthy external auditory canal, as well as a healthy and normal functioning middle ear. The OAE itself is thought to have an amplitude that may vary from -10 dB SPL to +30 dB SPL in healthy ears.3 Therefore, OAEs can be used as a screening tool to determine if the cochlea is responding to sound in a typical fashion. OAEs also can be used as a sophisticated diagnostic test. Thus, screening and diagnostic OAEs serve important and distinct roles in the differential diagnosis of hearing loss.4

OAEs offer many advantages with regard to screening (pass/fail) and diagnostic (adding to the differential diagnosis) applications. OAEs are highly sensitive and highly dependent on outer hair cell function, they do not require behavioral responses, and they offer immediate, ear-specific results. Further, OAEs are relatively inexpensive and do not require a sound-treated booth.

However, OAEs are susceptible to noise, and may be compromised via excessive cerumen, and a variety of middle ear anomalies (otitis media, ossicular discontinuity, otosclerosis, perforated tympanic membrane, etc). The mere presence or absence of OAEs cannot estimate the type and degree of hearing loss, as OAEs are not a test of hearing.

Recently, Beck5 reported that acoustic reflex testing should be reconsidered and added to every hearing screening protocol—as the information ascertained from simple pure-tone screenings is insufficient to state “normal hearing ability.” Likewise, the importance of adding OAEs to the diagnostic test battery cannot be overstated. The bottom line is, the audiogram is a diagnostic tool and it is relatively insensitive to multiple important aspects of hearing and listening. Of importance, a normal audiogram (or a normal pure-tone screening result) does not and cannot indicate normal “hearing” or “normal listening” (particularly in noise and other challenging situations) ability.

In this article, we present multiple introductory OAE concepts, the separate and unique application of screening versus diagnostic OAEs, and we present normative distortion product data for the Interacoustics Titan.

TEOAEs. In clinical practice, the most common OAEs recorded are Transient Evoked Otoacoustic Emissions (TEOAEs) and Distortion Product Otoacoustic Emissions (DPOAEs). Kramer6 notes TEOAEs are recorded during the silent intervals between brief broad-spectrum transient clicks, which activate a wide portion of the basilar membrane. Typical latencies (from click presentation to OAE recording) are perhaps 5 to 15 milliseconds. Shorter latencies are attributed to higher frequency regions of the cochlea, such as the basal region. Longer latencies are attributed to lower frequencies and therefore represent the apical end of the cochlea. TEOAEs can (generally) be measured between 1000 and 4000 Hz.

An “acceptable” TEOAE is usually 3 to 6 dB above the noise floor (referred to as the signal-to-noise ratio or SNR) and is reproducible. However, acceptance criteria do vary across locations, clinicians, and manufacturers. Of note, if a reproducible response is not evident at a SNR of 3 dB or more, it can be assumed the outer hair cells of that frequency region are not functioning normally. Fortunately, TEOAE amplitudes are larger in infants than adults, again helping to make TEOAEs an ideal hearing screening tool.6

DPOAEs. The other common OAE measure is the DPOAE. Because the cochlea is non-linear, distortion occurs—that is, some sounds generated within the cochlea were not externally presented. Specifically, when two pure-tones (for example, assume primary tone f1 is lower in frequency and primary tone f2 is higher in frequency) are presented to the human ear at the same time, the most prominent “distortion product” (DP) occurs at 2f1-f2—the “cubic difference tone.”

TEOAEs are recorded after and between click presentations, as mentioned earlier, while DPOAEs are recorded during cochlear activation. DPOAEs are typically recorded from 1000 to 6000 Hz, and can be recorded up to 10,000 Hz, too, but this varies by manufacturer. The DPOAE reflects the status of the cochlea at the representative cubic difference tone, not the primary tones (although the primary tones also must be perceived in order to create the DP). In general, DPOAEs appear 5 to 6 dB above the noise floor; that is, the SNR should be 5 to 6 dB, and it is essentially the amplitude of the DPOAE that determines a successful DPOAE.

As noted above, screening parameters for TEOAEs and DPOAEs have been established and they provide excellent, quick, and efficient guidelines with respect to pass/fail criteria. However, for diagnostic purposes, our goal is more substantial. That is, beyond a simple pass/fail, we aim to define DPOAE parameters such as “OAEs are present within normal range,” “OAEs are present, yet they are abnormal,” and/or “OAEs are not present.” Further, in many cases, diagnostic OAEs offer important information regarding the type and configuration of hearing loss, as well as the site of auditory dysfunction.

Similar to auditory brainstem response (ABR) and auditory steady state evoked response (ASSR), one must consider that each device (and the protocols selected within that device), each test environment, and each patient is unique. Therefore, it is particularly important to have “normative data” gathered from the specific device used, so as to maximally interpret the data acquired on an individual. The rest of this article will address our collection and analysis of normative data for the Interacoustics Titan DPOAE440 module.

The Titan DPOAE440 employs a number of technologies to improve detection and reduce test time. The detection algorithm uses Bayesian weighted averaging to obtain faster and more reliable recordings in typical test situations with noisy patients. The use of a reliability criteria and a DP tolerance setting reduces the detection of false-positive OAEs.

The ability to use “residual noise” as a “stop criteria” means that, if the noise is sufficiently low, the test will be discontinued after appropriate trials in search of a missing/absent OAE, saving unwanted test time. Automatic Gain Control (AGC) ensures that the correct stimulus level is being presented based on the ear canal volume, and the option of pressurized OAE testing allows for testing at tympanometric peak pressure, compensating for the effects of negative middle ear pressure, thereby reducing false refers.

While SNRs are commonly used as a means to judge whether a DPOAE is present or absent, the published literature advocates an objective approach to analysis by comparing a patient’s DPOAEs to an appropriate normative data set8,9 while performing diagnostic analysis. While many normative data sets have been published, OAE results should be developed with the same OAE device (make and model) used to test the patient.9

Therefore, we have undertaken a small clinical study to collect DPOAEs across a pre-defined frequency range to provide an appropriate normative data set to be used with the Titan DPOAE440 module.

Methods. Normal-hearing young adults ages 18 to 25 years were recruited on a volunteer basis from Denmark. Participants included 10 males and 10 females (19 male ears, 20 female ears. Note, the total data set for males was 19 as one data set was corrupted and could not be used). Each subject completed the Annex A—Questionnaire for Hearing Tests from ISO/DIS 389-9:2009 (E) prior to assessment that covered questions about history of hearing problems, exposure to loud noise, and familial hearing problems. Prior to testing, a standard consent form was read and signed by each participant. Subjects were instructed to avoid loud sounds for 8 hours prior to testing. Otoscopy, 226 Hz tympanometry, and 1 kHz ipsilateral reflex measurements were obtained using Titan IMP440 impedance module to confirm normal middle ear status. Audiometric thresholds to pure-tone air conduction audiometry were measured using the Interacoustics AD226 at 0.25, 0.5, 1, 1.5, 2, 3, 4, 6, and 8 kHz using the Hughson-Westlake protocol.10 Hearing was categorized as normal where thresholds were better than or equal to 20 dB HL.

Following confirmation of normal hearing thresholds and middle ear status, DPOAEs were recorded using the Titan DPOAE440 module. DPOAEs were measured using primary tones labeled f1 and f2, with a ratio (f2/f1) equal to 1.22. The f2 frequencies measured covered the range from 500 to 8000 Hz, three frequencies per octave, as well as 9000 and 10,000 Hz (primary tone intensity levels used for f1=65 dB SPL, and f2=55 dB SPL). Artifact-free averaging was conducted at each f2 frequency for 20 seconds to allow the noise at each frequency to reach sufficiently low levels. Testing was conducted for 5 minutes per ear across the frequency range and results were continuously displayed and stored in a DP-Gram for further analysis. All testing was conducted in a quiet test room, consistent with ISO8253-1.4

Results. Results from each subject were compiled into an Excel spreadsheet to calculate the mean, standard deviation, and percentiles. The mean noise floor (NF) also was calculated. Tables 1-3 display the normative data for male ears (n=19), female ears (n=20), and males and females combined (N=39) between 500 and 8000 Hz.

Clinical Use of Normative Data

Analysis of DPOAEs using normative data (as shown above) is enhanced by displaying the normative range on the DP-Gram.9 The following steps are recommended to make diagnostic inferences about DPOAE results.

1) Assess the noise floor and ensure it is sufficiently low for the correct analysis of the presence or absence of DPOAEs.

2) Determine which category the recorded DPOAEs fall into:

a) If the recorded DPOAE meets the SNR criteria for detection and falls within the normal range, it would be “present and normal.”

b) If the recorded DPOAE meets the SNR criteria for detection, but is below the normal range, it would be categorized as “present, but abnormal.”

c) If the recorded DPOAE does not meet the SNR criteria, it would be categorized as “absent.”

As the clinical acceptance and utility of OAEs has evolved, DPOAEs have been identified as having significant diagnostic value. However, to maximize the usefulness and accuracy of DPOAEs, development of, and comparison to, normative data is important. In this article, we identified multiple types of OAEs, reviewed methods used to gather normative data, and produced tables to help interpret DPOAEs obtained using the Interacoustics Titan DPOAE440 module.

CORRESPONDENCE can be addressed to Jessica Arrue Ramos at: [email protected]

Experiences with Developing and Maintaining Web Sites: A Survey