Slowing down compression attack/release times may assist in speech processing

The findings of this case study are consistent with the research that supports the use of slower compression times when fitting traditional compression circuitry hearing aids to patients with ANSD. Slowing down the compression rates can have a positive impact on speech perception; however, more research is needed to investigate how these modifications affect the patient in everyday listening situations.

Auditory neuropathy (AN) is a term used to describe a type of hearing disorder in which outer hair cell function (the cochlear amplifier) is normal; however, there is a disruption in afferent conduction along the auditory neural pathway. The diagnosis of AN is based on a distinct pattern of audiometric test results, including normal otoacoustic emissions (OAEs) and/or cochlear microphonics (CM), with absent middle-ear muscle reflexes and absent or abnormal auditory brainstem responses (ABR).1

The range of auditory complaints and auditory difficulties associated with AN is vast and has resulted in the acceptance of the term auditory neuropathy spectrum disorder (ANSD) to better describe the disorder.2 A majority of individuals with ANSD have low frequency hearing loss and/or very poor speech recognition scores for the degree of hearing loss measured through puretone assessment.3,4 Further studies have demonstrated poor temporal resolution associated with ANSD, which results in poor perception of changes in stimuli over time. Speech perception can be adversely affected due to reduced sensitivity to follow fast and slow temporal modulations, reduced ability to detect gaps in continuous sound, and reduced frequency discrimination at low frequencies.5-9 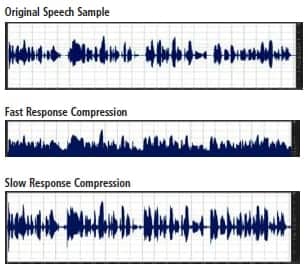 Figure 1. Spectrographs of speech sample demonstrating the effects of compression rate on the amplitude of the spectral envelope. Note the decrease in amplitude and increase in noise present in the “fast response” compared to the enhanced amplitudes of “slow response” for a speech sample.

Clinical management of patients with ANSD can be difficult. With hearing- impaired patients, audiologists typically address “restoring audibility” with the utilization of hearing aids by meeting prescribed targets for frequency and gain. Some management strategies propose fitting a child with ANSD with hearing aids “when consistent test-retest reliability” for puretone and speech detection thresholds is obtained.10 However, research has demonstrated that the behavioral puretone thresholds for patients with ANSD can fluctuate and are less predictive of the child’s true hearing difficulties.

Several studies have demonstrated that the use of non-linear amplitude compression hearing aid circuitry, such as WDRC, which tend to utilize fast compression attack and release times, actually reduces the amplitude fluctuation of the spectral envelope of speech (Figure 1). This reduction of the amplitude fluctuations in the spectral envelope can make it more difficult to perceive these much-needed temporal cues. Further, it can reduce consonant and sentence intelligibility and decrease the overall signal-to-noise ratio.6,7,12-14 The impact of this reduction in the temporal cues may be more detrimental to children who rely more heavily on temporal variations during their language development.15

Research utilizing speech perception scores and psychophysical results supports the use of linear circuitry and other innovative signal processing schemes to improve speech understanding for patients with ANSD. One method proposed was to filter out low frequency signals or shift them to the high frequency ranges via frequency transposition. Another method proposed to expand the amplitude of the temporal modulations. Adjusting the release time for compression to a slower rate allows for greater amplitude differences in the temporal modulations. These enhanced amplitude differences help provide salient cues for consonant and vowel perception. The enhanced amplitude difference also increases perception of speech events, such as voice onset time, burst, and transitions, and helps to maximize signal-to-noise ratios.5,8,13-16

Background. The subject of this case study is a 6-year-old child who was diagnosed with bilateral ANSD shortly after birth. Birth history was significant for induced labor with Cesarean delivery and included a 6-day NICU stay due to breathing difficulties and oxygen use for an unknown number of days. The newborn hearing screening suggested bilateral hearing loss. At age 6 weeks, the child received a diagnostic ABR that revealed ANSD for both ears.

Audiometric test results. Audiograms obtained utilizing behavioral assessment techniques have demonstrated variable responses to puretone stimuli for both ears (Figure 2). Repeated measures of ipsilateral middle ear muscle reflexes have demonstrated absent reflexes in both ears at 500 to 4000 Hz. Distortion product otoacoustic emissions (DPOAEs) were not measured until after the child had worn hearing aids for a year and, when evaluated, were absent bilaterally for all test frequencies.

ABR results. ABR evaluations demonstrated a dys-synchronous response bilaterally to both click and tone burst stimuli. In addition, there is an inversion of the cochlear microphonic beyond stimuli onset bilaterally when comparing rarefaction and condensation polarities (Figure 3) for the click stimuli and for tone burst stimuli (Figure 4).

Hearing aid fitting procedure. The child was fitted binaurally with Starkey 5 Series iQ 11 BTE hearing aids coupled to soft material earmolds with a small vent. The hearing aids were programmed for a flat 35 dBHL hearing loss, based on the hearing loss utilized to program the previous set of Phonak Una M hearing aids, which were well tolerated by the child.

Recorded CID W-22 words were presented at 60 dBHL via a GSI-61 audiometer through soundfield speakers. Electroacoustic equipment met manufacturers’ and the current ANSI standards. Word recognition scores (WRS) were obtained in the sound booth with the child seated in the speech pathologist’s lap, at a 0° from the soundfield speaker. A 25-word list was utilized to determine word recognition ability and three examiners recorded the child’s responses to the stimuli. One examiner was the child’s speech/language pathologist who was familiar with the child’s speech, and the other two examiners were new to the child. Responses were recorded as correct if determined so by at least two of the three examiners.

Anecdotal findings. There was a visible difference in the child’s demeanor between the second and third trials, when the compression times went from the slower parameters to the faster compression times. During the first two trials, the child was quick to respond, used a normal speech volume, and was very confident in her responses. During the last trial, when the compression rates were faster, the child became very pensive, spoke much quieter, was slower to respond to stimuli, and appeared very unsure of her responses.

At a subsequent follow-up visit, the family reported that the child was able to “eavesdrop on our conversations, even when we whisper…she couldn’t do that before.”

The findings of this case study are consistent with the research that supports the use of slower compression times when fitting traditional compression circuitry hearing aids to patients with ANSD. Slowing down the compression rates can have a positive impact on speech perception; however, more research is needed to investigate how these modifications affect the patient in everyday listening situations.

In addition, further research should be conducted to compare the amplitude differences in the spectral envelope of a speech signal that has been filtered through slow compression attack/release times and through linear circuitry to determine whether there is a statistically significant difference between the two conditions. This additional information may provide insight when selecting hearing aid circuitry for patients with ANSD.

For children with ANSD who are not developing speech/language, a cochlear implant may be a more appropriate part of the child’s treatment plan.11,14

This case study was originally presented at the Starkey First Pediatric Symposium in September 2010. 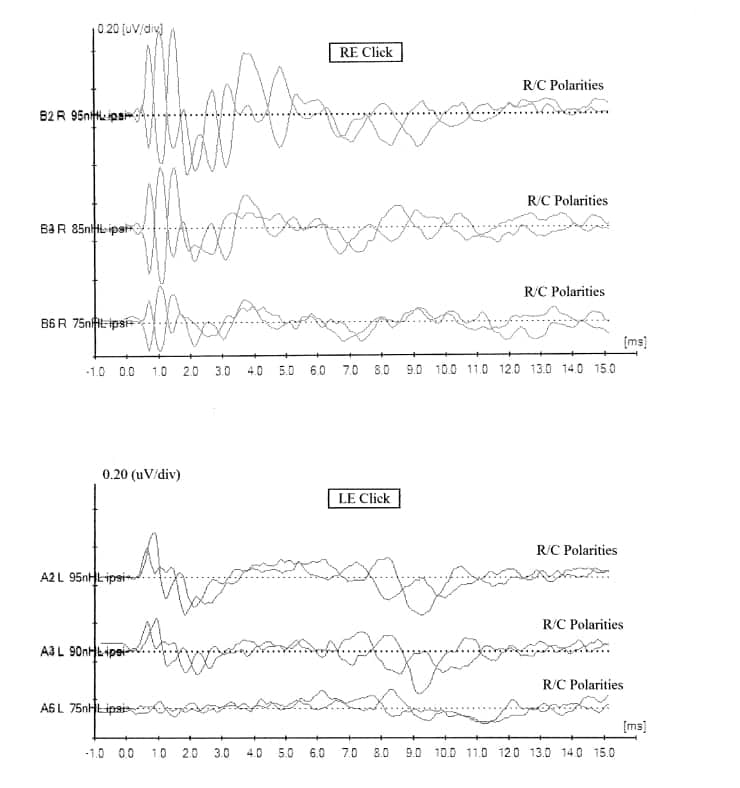 Figure 3. Comparison of rarefaction and condensation polarities for click stimuli demonstrated in the subject’s ABR. 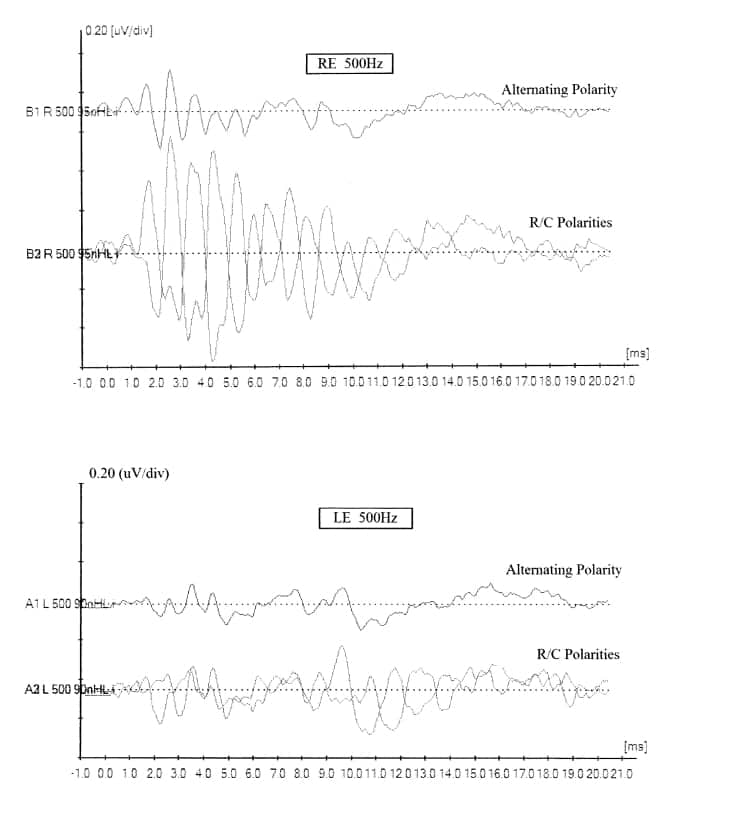 CORRESPONDENCE can be addressed to:

For more HR Calendar entries, or to add your event to our calendar, visit: www.hearingreview.com/calendar.asp

SPECIAL EDITION ON ANSD guest-edited by Jerry Northern, PhD, can be found at: tinyurl.com/8ql2snt 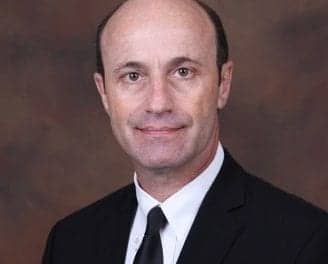