People with tune deafness aren’t able to tell when a musician accidentally strikes the wrong note in a song, but their brains know the difference. Researchers from the National Institute on Deafness and Other Communication Disorders (NIDCD), part of the National Institutes of Health, have found that people with tune deafness, an auditory processing disorder in which a person with normal hearing has trouble distinguishing notes in a melody, are able to detect a wrong note unconsciously. The study is published in the June 11, 2008, issue of the online journal PLoS ONE.

Because tune deafness is a commonly occurring phenomenon that is largely inherited, the study of this disorder could enable scientists to use the tools of genetic research to better understand the differences between conscious and unconscious thought.

Neuroscientists have long been baffled by what separates the state of consciousness from unconsciousness. Other sensory disorders have been identified in which the brain perceives a stimulus outside of conscious awareness. However, because these disorders are typically caused by damage to the brain, there is an inconsistency in data from one patient to the next and researchers have difficulty finding a sufficient number of volunteer patients for clinical trials.

“The prevalence of tune deafness is surprisingly high—perhaps as much as 2 percent of the population is tune deaf—and it exists in an otherwise normal, uninjured brain,” said James F. Battey, Jr., M.D., Ph.D., director of the NIDCD. “These factors, combined with the fact that tune deafness is largely genetic in origin, now raises the possibility of using tune deafness as a new way to study consciousness.”

A person who is tune deaf is unable to perceive pitch, reproduce melodies, or identify deviations in a melody. According to geneticist Dennis Drayna, Ph.D., one of the study authors, not only is music not enjoyable for people with tune deafness, many of them don’t fully understand what music is. “For severely affected tune-deaf people, Yankee Doodle is no different than traffic noise in Manhattan. It’s fairly meaningless to them,” he said.

Dr. Drayna worked closely with neuroimaging scientist Allen Braun, M.D., and others in NIDCD’s Division of Intramural Research to randomly screen 1,218 individuals using an online version of the Distorted Tunes Test. The Distorted Tunes Test is a standardized survey that tests a person’s ability to identify whether or not a short melody is played correctly. (The online version, which was created by Dr. Drayna, can be found on the NIDCD Web site: www.nidcd.nih.gov/tunetest/.) The researchers then selected those volunteers who scored in the bottom 10 percent, screened them for hearing loss and other factors, and arrived at seven subjects with severe tune deafness who were otherwise medically normal and were willing to take part in the study. Ten healthy control subjects who performed normally on the Distorted Tunes Test also took part in the study.

Dr. Braun, Joseph McArdle, Ph.D., and others then used electroencephalography (EEG), a brain imaging technique that places electrodes around a person’s head and measures the electrical impulses of millions of neurons in the brain, to study these subjects further. The researchers measured the volunteers’ responses as they listened to an altered version of the Distorted Tunes Test in which the incorrect melodies had a single wrong note at the end. Volunteers listened to 102 familiar melodies, roughly half of which were correct, and half of which contained the errant last note. The researchers then sifted through the EEG data to isolate the brain’s response to a specific stimulus—in this case, the right or wrong note.

Of principal interest were two signals that brains normally generate when they are presented with a stimulus that doesn’t match what the brain expects to hear, such as the wrong note in a song. The first, the mismatch negativity (MMN), is a large negative signal that occurs roughly 200 milliseconds after the unexpected stimulus is heard; the second signal, the P300, is a large positive signal occurring roughly 300 milliseconds after the unexpected stimulus.

Because tune-deaf people consistently don’t recognize when a wrong note is played or sung, the researchers hypothesized that their brains would not generate the MMN or P300 signals, and as expected, this was true for the MMN signal. However, in the case of the P300 signal, tune-deaf volunteers were processing the wrong note in the same way as the normal participants, even though they weren’t consciously aware of the deviation. Other brain signals demonstrated that correct notes were being processed equally well for both tune-deaf and normal volunteers.

As for how a brain can register a wrong note without the person being aware of it, the researchers explain that the MMN and P300 signals are generated in different parts of the brain. The MMN is generated near the primary auditory cortex, in the brain’s temporal lobe, while the P300 is generated in the frontoparietal cortex, downstream from the auditory cortex. Normal brains process sounds in a series, with the frontal and parietal cortices receiving signals that have already been processed in the auditory cortex. In someone with tune deafness, however, the direct route for processing the wrong note may be disrupted, and signals are possibly being routed to the two regions through parallel pathways independent of each other. In this way, information about a wrong note may not be reaching the auditory cortex at all, while information reaching the frontoparietal cortex is not consciously perceived.

The researchers hope to conduct studies to better pinpoint the locations from which the MMN and P300 signals originate in the brain. In addition, the researchers will continue to pursue genetic studies on the causes of tune deafness which, if found, could help them and others grapple with the very puzzling notion of consciousness at the cellular and molecular level.

NIDCD supports and conducts research and research training on the normal and disordered processes of hearing, balance, smell, taste, voice, speech and language and provides health information, based upon scientific discovery, to the public. For more information about NIDCD programs, see the Web site at www.nidcd.nih.gov.

The National Institutes of Health (NIH) — The Nation’s Medical Research Agency — includes 27 Institutes and Centers and is a component of the U. S. Department of Health and Human Services. It is the primary federal agency for conducting and supporting basic, clinical, and translational medical research, and it investigates the causes, treatments, and cures for both common and rare diseases. For more information about NIH and its programs, visit www.nih.gov. 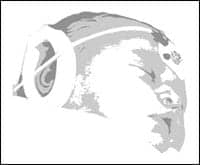