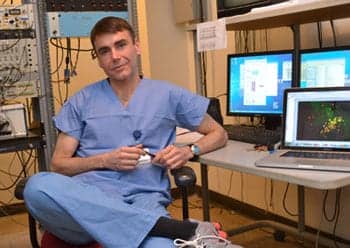 New research from Massachusetts Eye and Ear, Harvard Medical School, and the Harvard Program in Speech and Hearing Bioscience and Technology may have found a key piece in the puzzle of how hearing works by identifying the role of the olivocochlear efferent system in protecting ears from hearing loss.

Researchers learned that noise exposure is clearly more dangerous than typically thought, and at lower levels. They’ve also gained insight into why it is difficult for some people to hear in “everyday” noisy environments such as restaurants. The findings could eventually lead to screening tests to determine who is most susceptible to hearing loss. Their paper was published in the Journal of Neuroscience.

Until recently, it was common knowledge that exposure to a noisy environment (concert, iPod, mechanical tools, firearm, etc) could lead to permanent or temporary hearing loss. Most audiologists would assess the damage caused by this type of exposure by measuring hearing thresholds, the lowest level at which one starts to detect/sense a sound at a particular frequency. Doctors Sharon Kujawa and Charles Liberman, both researchers at Mass Eye and Ear, showed in 2009 that noise exposures leading to a temporary hearing loss in mice (when hearing thresholds return to what they were before exposure) in fact can be associated with cochlear neuropathy, a situation in which, despite having a normal threshold, a portion of auditory nerve fibers is missing.

The inner ear, the organ that converts sounds into messages that will be conveyed to and decoded by the brain, receives in turn fibers from the central nervous system. Those fibers are known as the olivocochlear efferent system. Up to now, the involvement of this efferent system in protection from acoustic injury—although clearly demonstrated—has been a matter of debate because all the previous experiments were probing its protective effects following noise exposures very unlikely to be found in nature.

Stephane Maison, PhD, lead author, explains, “Humans are currently exposed to the type of noise used in those experiments but it’s hard to conceive that some vertebrates, thousands of years ago, were submitted to stimuli similar to those delivered by speakers. So many researchers believed that the protective effects of the efferent system were an epiphenomenon—not its true function.”
He continued, “Instead of using loud noise exposures evoking a change in hearing threshold, we used a moderate noise exposure at a level similar to those found in restaurants, conferences, malls, and also in nature (some frogs emit vocalizations at similar or higher levels) and instead of looking at thresholds, we looked for signs of cochlear neuropathy.”

The researchers demonstrated that such moderate exposure leads to cochlear neuropathy, which causes difficulty to hear in noisy environments.