HIA’s “Hearing On the Hill” Brings Hearing Care to the Capitol
The Hearing Industries Assn (HIA) and 14 of its member companies, along with 11 allied organizations, brought the cause of hearing healthcare to Capitol Hill on May 22. Over 300 people—including 12 legislators and more than 70 hill staffers—were treated to the third “Hearing on the Hill” (HOTH) event, which featured information on the latest in hearing-related technology, as well as educational materials and actual hearing screening. Additionally, HIA members held over 30 individual meetings with elected officials and aides to discuss issues relevant to the hearing healthcare industry.

Senator Norm Coleman (R-MN) co-chair of HOTH, sparked the success of the event from the outset. The Senator took time to meet with members and to speak at length during the media briefing. Senator Coleman noted in his remarks that he was one of the “baby boomers” who would most likely need hearing aids in the future. In his youth, Coleman had been a roadie for a rock band and was exposed to high levels of sound for an extended period of time. Fortunately, the Senator passed his hearing screening, which was conducted by David Fabry, PhD, of Phonak. Senator Coleman urged HIA members to “make some noise” while they were on Capitol Hill.

The HOTH reception in honor of the co-chairs of the Congressional Hearing Health Caucus (CHHC) that followed the day’s events featured comments of the three CHHC co-chairs, a bi-partisan group consisting of Members of Congress committed to the support of hearing health issues. Congressional Representatives Jim Walsh (R-NY), Lois Capps (D-CA), and Carolyn McCarthy (D-NY), each spoke at the reception and explained their hopes that the hearing industry continues to progress. To show the hearing community’s appreciation, HIA Chairman Jerry Ruzicka presented a tribute to each of the co-chairs.

Freedom from Sedation: A New Technology for ABRs 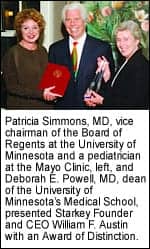