In-the-ear (ITE) hearing aid shells have traditionally been made using hard acrylic, a material associated with the dental industry that has been in use since the 1960s. Acrylic shells are both hard and hollow, and while this material provides a suitable package for housing the electronics of a hearing aid, it also has numerous limitations. Perhaps the greatest weakness of acrylic materials is its rigid characteristic, which was never intended to conform to the physically changing nature of the ear canal. Because of this, conventional shells may fit well when first inserted, but less well when the wearer speaks, chews, or otherwise moves his/her jaw. The practical results of this limitation are that slit leaks are created which can result in feedback, and retention is reduced which can result in an insecure fit. At times acrylic shells can be uncomfortable, particularly during jaw movement.

Due to the limitations of hard acrylic shells, alternative shell materials have been sought for a number of years. Early attempts with soft materials such as polyvinyls and soft acrylics failed because they quickly became hard, cracked, and discolored. Newly developed materials, however, have eliminated these problems, and soft-solid hearing aid shells are now available in the marketplace (eg, SoftEar™ by SoftEar Technologies, LLC, SilFlex™ by Interton). These new materials are based on a 12 durometer elastomer that is best described as a medical grade silicone. (By comparison, the much harder acrylic shell has a durometer of 90).

The softer material has numerous advantages. First, unlike previous soft materials, silicone will not deteriorate over time. It is designed to retain its soft quality and color quite well. Second, silicone is flexible, thus maintaining comfort and a good acoustic seal during jaw movement. Third, silicone shells are not hollow but completely solid. All components of the device are embedded in silicone, which eliminates air pockets that can contribute to internal oscillation. Embedded components are also better protected against mechanical shock and moisture, which should prolong product life.

Anecdotal reports about increased patient comfort, better retention, better acoustic seal, more gain before feedback, and improved sound quality have circulated since the introduction of silicone shells, but until recently there had been no independent investigation of these potential benefits. This article summarizes the results of the first such investigation.

Clinical Trial of a Soft Shell
A clinical assessment of the potential benefits of silicone shell construction was recently conducted by the Center for Hearing Aid Research and Technical Training (CHARTT), Indiana University, under the direction of co-author Larry Humes, PhD. The purpose of this study was to investigate the anecdotal reports suggesting that hearing aids made from silicone materials have both physical and acoustic advantages over traditional acrylic shells.

Method: In order to investigate the clinical benefits of silicone shells, 30 hearing-impaired listeners with gradually sloping mild-to-moderate sensorineural hearing losses were recruited for participation. The mean audiogram of these subjects is shown in Figure 1. Subjects had an average age of 66 years and were roughly divided equally between males and females and between experienced and inexperienced hearing aid users. Subjects were told that in exchange for their participation they would each receive a free pair of hearing aids at the end of the investigation.

Each subject was fit with two pairs of unvented completely-in-the-canal (CIC) hearing instruments, one pair made with traditional hard acrylic shells, the other with silicone shells. All instruments were electronically identical in terms of circuit design and were matched in terms of gain and frequency response in each ear, using the Fig6 fitting method.1 During the initial fitting, a variety of real ear measures was taken, including Real Ear Insertion Gain (REIG), Real Ear Maximum Gain (REMG) and the Real Ear Occluded Response (REOR). REIG was obtained at 65 dB SPL; REMG was obtained at 50 dB SPL with the volume control adjusted to maximum gain before feedback; REOR was obtained at 85 dB SPL with the hearing aid turned off. All real ear measurements were obtained using a probe tube built into the hearing aid, thus eliminating slit leaks. Real ear measures were made in order to assess: 1) goodness of fit to the prescribed targets; 2) maximum available gain before feedback, and 3) acoustic seal. During the initial fitting subjects also completed the unaided portion of the Abbreviated Profile of Hearing Aid Benefit.2

Once the fitting and real ear measures were completed, an “at-home” evaluation began. During this phase of testing, half of the subjects wore the hard shell instruments first, and the other half wore the silicone shell instruments. After a period of 3-4 weeks, subjects switched to the other type of shell for a similar evaluation period. During these evaluation periods, subjects kept a journal of daily “Hearing Aid Use” in which they recorded the number of hours per day the devices were worn. Subjects also recorded their daily “Hearing Aid Awareness,” a rating scale ranging from 1 (not aware of the aids in the ear) to 10 (very much aware of the presence of the aids when worn).

At the end of the evaluation period, subjects returned to the clinic, completed the aided portion of the APHAB, and were asked to provide their impressions of sound quality using 10-point rating scales described by Gabrielsson et al.3 Sound qualities included Softness, Brightness, Clarity, Fullness, Nearness, Loudness, Spaciousness, and Total Impression. Ratings were based on impressions gained in the lab while listening to 65 dB SPL speech (rms level for the Speech Intelligibility Rating Test4) and to classical music (peak levels ranging from 45-75 dB SPL).

In addition to the APHAB and Gabrielsson scales, subjects were also asked to complete a modified version of the MarkeTrak-IV hearing aid satisfaction survey.5 Survey modifications included the addition of items specifically addressing comfort, retention, and feedback. These additions were made in order to assess benefits specifically associated with soft shells, something that could not be done using the original MarkeTrak survey. Most MarkeTrak items pertaining to listening situations were excluded from the survey, as these items focus on signal processing, a variable that was held constant in this investigation.

Finally, subjects were asked to rate the value of both types of shells, using absolute (dollar figure they would be willing to pay) and relative (one better or worse than the other by a specified degree) terms. At the conclusion of the study subjects were asked to choose which pair of instruments they wished to take home at no charge.

Results
Real Ear Measures: Real ear results are summarized in Figure 2, with REIG, REMG, and REOR shown in Figures 2a-2c, respectively. Left and right ear data have been pooled in each of these figures. REIG results (Figure 2a) showed an excellent match to target from 250-2000 Hz, with a relatively poor match at higher frequencies. The poor match to target at high frequencies was not unexpected given the prescriptive requirements of the Fig6 method. Statistical analysis revealed no significant differences between hard and soft shells in terms of REIG.

REMG results (Figure 2b) indicated that soft shells provided slightly higher maximum gain (by about 2 dB) before feedback than hard shells, but these differences did not reach statistical significance. REOR results (Figure 2c) showed that, at low frequencies, soft shells provided slightly more attenuation of loud sounds than hard shells. At high frequencies the reverse was true. A single factor analysis of variance revealed that the differences were statistically significant (p<.05) at 2000 Hz, 3000 Hz, and 4000 Hz. It should be noted, however, that the REOR does not represent a typical use situation (high level input with the aid turned off) but does represent the attenuation/damping characteristics of the two shell types under extreme conditions.

APHAB: APHAB results are summarized in Figure 3. This figure shows APHAB scores for each of four subscales: Ease of Communication (EC), Reverberation (RV), Background Noise (BN) and Aversiveness (AV). Results indicated no statistically significant differences between hard and soft shells on any of the four subscales. Both types of aids, however, provided significant benefit (aided scores compared to unaided scores) for the EC, RV and BN subscales.

Subjective Sound Quality: Perceived sound quality results were obtained in the lab. For reference, idealized norms based on normal hearing listeners3 were also considered. The aided data fall within one perceptual unit of the idealized norms for 6 of the 8 sound quality dimensions, indicating good overall sound quality. For the Softness and Brightness scales, aided results were rated somewhat softer and somewhat brighter than the idealized norms. More importantly, no significant differences were found between hard and soft shells for any of the 8 scales. Both types were judged by subjects as having very good sound quality. These results were not unexpected given the fact that signal processing and response characteristics were identical for both types of devices.

Satisfaction Scores (Modified MarkeTrak Questionnaire): Thus far the results of this investigation suggest few, if any, differences between hard and soft shell hearing aid performance. Both types perform well. This pattern of results, however, changes once real-world benefit is assessed using the modified MarkeTrak. Median satisfaction ratings are shown in Figure 4. Items from the original and modified MarkeTrak are shown on the left- and right-hand sides of the figure, respectively.

Figure 4. Median feature satisfaction ratings based on the original (4A) and modified (4B) MarkeTrak survey.

Figure 5. Mean Awareness ratings obtained during the first and final weeks of testing.

Daily Use: Mean daily hearing aid use for hard and soft devices was found to be 8.37 hours and 8.52 hours per day, respectively, indicating a similar evaluation time. A separate analysis comparing use during the first week versus the last week of use also showed similar results in terms of hours of use per day. These differences did not reach statistical significance. When the aids were worn, however, listener awareness decreased over time (Figure 5). Mean daily hearing aid awareness ratings for hard and soft devices were found to be 5.9 and 5.3 (on a 10-point scale), respectively, during the first week of use, results that were not significantly different. During the final week of use, scores were 4.4 and 3.2, respectively—a significant difference. These data indicate that those wearing soft shell devices become less aware of the presence of their aids more quickly and to a greater degree than those wearing hard shell devices.

Selection by Subjects: Perhaps the ultimate indicator of preference is the final selection results. Figure 7 shows the number of subjects ultimately choosing to keep (at no charge) the soft shell and hard shell devices. Over three-quarters of the subjects (23 of 30 subjects, or 76.7%) chose to keep the soft shell hearing aids, a statistically significant result (Chi-square, p<.05).

Summary
In general, the results of this investigation fall into two categories. The data indicate that silicone shell hearing instruments do not provide obvious advantages over hard shells when real ear measurements are made. Under controlled physical and acoustic conditions, both types of devices perform comparably well. Outside of the clinical or laboratory environment, however, soft shell devices appear to provide tangible benefits that users can readily perceive. Results of this study can be summarized as follows:

It appears that soft silicone shells may have advantages over hard, acrylic shells. These advantages may not be obvious during the initial fitting of the devices, but will likely become apparent to the user over time as the aids are worn in the real world. The results from this study suggest that soft shells offer a viable alternative to hard shells, a conclusion that serves as the basis for continuing investigations. 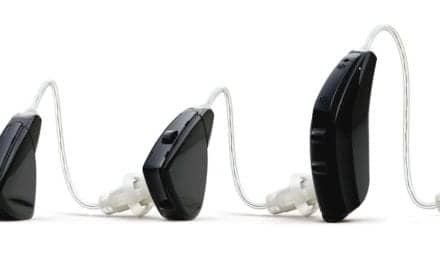 The Effect of Bandsplit Directionality on Speech Recognition and Noise Perception