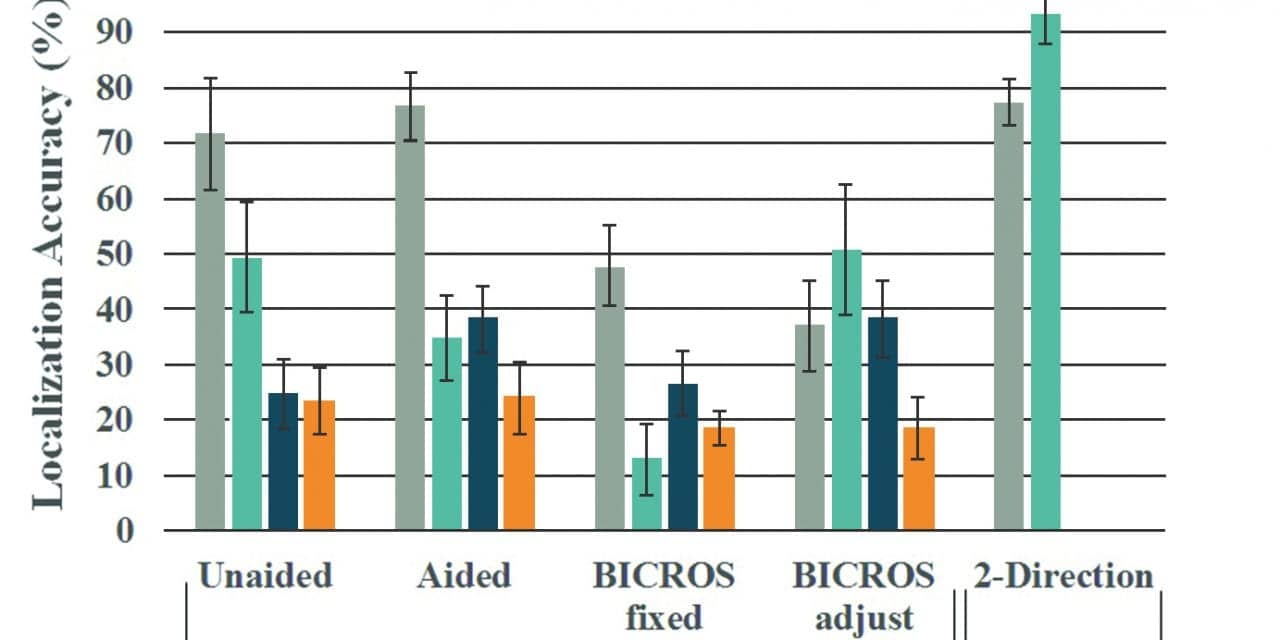 While the Contralateral Routing of Signals (CROS) hearing aids or Bilateral Contralateral Routing of Signals (BiCROS) hearing aids may achieve audibility of sounds originating from the side of the unaidable ear for people with this hearing loss configuration, localization can still be challenging. This paper discusses how we may enable CROS/BiCROS wearers to improve their localization abilities. This may not be the case for individuals with an asymmetrical or unilateral hearing loss.3-5 While the Contralateral Routing of Signals (CROS) hearing aids or Bilateral Contralateral Routing of Signals (BiCROS) hearing aids may achieve audibility of sounds originating from the side of the unaidable ear for people with this hearing loss configuration, localization can still be challenging. This paper discusses how we may enable CROS/ BiCROS wearers to improve their left/right localization.

Why Is Localization Difficult for People with Unilateral Hearing Loss? A CROS or BiCROS device can improve audibility for sounds arriving at both the unaidable and aidable ears. However, this solution does not re-establish inter-aural cues that are essential for localization.

A CROS/BiCROS system alleviates the effects of the head shadow6 and provides audibility of sounds from the side of the unaidable ear. It offers improvements in speech recognition ability in quiet and in some background noise conditions when compared to the unaided and unilaterally aided conditions.8-12 Real-world subjective benefits were also supportive of the CROS/ BiCROS hearing aid.11,13,14

However, neither system restores true binaural functions in that sounds from both the aidable and unaidable sides are heard in the same aidable ear at the same or very similar levels. No inter-aural differences (time or intensity) exist between sounds from both ears. This makes localization of sounds a challenge with a CROS/BiCROS hearing aid.10

The direct transmission of sounds in a CROS/BiCROS system effectively eliminates any inter-aural differences and is perhaps the main reason for confusion in left/right localization. If one can recreate in a CROS/BiCROS system some kind of acoustic differences between sounds originating between the aidable and unaidable ears while keeping audibility, its wearers may be able to perceive this acoustic difference and use it in left/right localization.

The On/Off switch as a means to create acoustic difference. In an unaided condition, a sound that is presented on the side of the unaidable ear is typically not heard by the aidable ear, or heard at a lower volume (than it is if presented on the aidable side) because of the head shadow effect. With the CROS transmission, the sound from the unaidable ear will be heard at its full volume. If a CROS/ BiCROS wearer can learn the difference in sound quality/level between having the CROS and not having the CROS, such difference could serve as a cue for left/right localization.

The difference in sound level/quality can be created in the aided CROS condition by wearer deactivation of the CROS transmission. The wearer can be instructed to pay attention to the loudness of a sound while the CROS microphone is activated. Then he/ she is instructed to listen for the same sound while deactivating the CROS microphone. If the sound originates from the side of the unaidable ear, deactivating the CROS transmitter should eliminate that transmission path. The sound has to overcome the head shadow and be picked up at the aidable ear. This decreases the loudness of the sound. Because the magnitude of the head shadow can be as large as 15 dB SPL in the high frequencies,15 this magnitude of intensity difference can be used as a cue for the CROS/ BiCROS wearers to determine the location of a sound. A sound that originates on the aidable ear side or the front or back should not be affected by deactivating the CROS transmitter.

A CROS/BiCROS device that allows its wearers to create level differences is a step towards optimizing the CROS hearing aid for localization. This can be achieved with a convenient On/Off switch on the CROS transmitter of the CROS/BiCROS system. In such a case, the user can press the On/Off switch at any time and experience any potential loudness change as a means for left/right localization. A convenient On/Off switch also avoids the perils of removing the device or battery entirely. Such an on-board control was shown to be effective not only in improving localization, but also speech understanding in noise and subjective comfort.16

Localization Training as an Important Element for CROS/BiCROS Wearers

Having a convenient On/Off switch on the CROS transmitter is a first step in achieving left/right localization. An equally important, if not more important element, is convincing the wearer that such manipulation of the On/Off switch is beneficial, albeit seemingly tedious at first. This cannot be done simply by alerting the wearers to the presence of such a switch on the device, or instructing them how to press the On/Off switch only. Rather, personal experience with the effect of adjusting the On/ Off switch is needed for effective compliance.

This can be achieved through demonstra- tion and training. The CROS/BiCROS wearers should be instructed to use the device (CROS microphone activated) at all times. They should also be instructed to deactivate the CROS microphone when speech under- standing is difficult (too loud, too noisy) or when they desire to know the direction of a sound source (ie, localization). They should be provided the rationale for deactivating the On/ Off button and how it may aid localization.

The demonstration/training can be carried out easily in most clinics with sound- field audiometry setup. Facilities where such a set-up is not available can use a laptop or desktop computer connected to two loud-speakers, and they can request a copy of the program from the authors.

The loudspeakers should be placed to the left and to the right sides of the CROS wearer at equal distance. A continuous stimulus, such as any type of noise or sinusoids from an audiometer, a recorded speech list used during speech audiometry, or even music played through a computer or CD player, may be used for demonstration. These stimuli are presented from one loudspeaker at a time.

The wearers are instructed to deactivate and activate the On/Off button and listen for any differences in loudness. After listening to the stimuli presented from one loudspeaker for 2-3 times, the same stimuli can be presented from the opposite loudspeaker, and the wearers are instructed again to listen for any difference in loudness with On/Off switch adjustment. When the wearers report that the sound becomes softer when the CROS microphone is turned off, the clinician should inform the wearers that the sound is coming from the side of the unaidable ear or CROS transmitter.

Figure 1. Cue card provided to the CROS wearers to help them remember their task and identify sound source.

A brief explanation may be valuable at this time. When the wearers report that no change in loudness is noted, the clinician should inform the wearers that the sound comes from the side of the aidable ear or the receiver side. Again, an explanation reinforces the wearer’s perception. Although in real-life the same sound may come from the front or the back, explaining such a possibility should wait until the wearers are familiarized with the task.

To help wearers remember their tasks, a cue card is provided as they perform the reinforcement task (Figure 1). This training should continue until the wearers are correct in their identification for at least four consecutive trials. The entire demonstration/training exercise typically takes less than 10-15 minutes.

Assessing the Effectiveness of the Training Protocol A study was conducted to evaluate the effectiveness on the appropriate use of the On/Off switch on left-right localization. The study included 9 participants, all of whom were BiCROS candidates with one unaidable ear and one aidable ear with a mild-to-moderately severe degree of hearing loss.

This CROS system uses Widexlink near-field magnetic induction (NFMI) wireless technology17 to transmit sounds efficiently from the unaidable ear to the receiving hearing aid. It features a 25 kHz sampling frequency (which allows transmission band-width of 12 kHz) and True Input Technology (which allows for linear input up to 113 dB SPL without clipping or compression limiting). In addition, the CROS transmitter microphone was configured to have an option of omnidirectional or broadband fully adaptive directional microphone.

2) Aided (ie, use of the study hearing aid on the aidable ear only);

3) Fixed BiCROS (the use of the CROS transmitter on the unaidable ear and the Dream hearing aid on the aidable ear); and

4) Adjusted BiCROS (the use of the CROS transmitter on the unaidable ear and the study hearing aid on the aidable ear).

The default settings on the hearing aids were used, and participants were trained on the use of the On/Off switch while following the demonstration/training protocol described above. They were allowed to use the On/ Off switch during the localization test in the Adjusted BiCROS condition.

Stimuli and test setup. Study participants were seated in the middle of a sound booth, with loudspeakers placed at 0°, 90°, 180°, and 270° azimuth. Each loudspeaker was placed 1 meter from the center of the participant’s head. Stimuli were presented at 30 dB sensation level (SL, re: the highest threshold mea- sured for each of the three test stimuli). Localization accuracy for sounds originating from the front showed some small differences across the different hearing aid conditions. It is of interest to note that a 12% improvement in localization accuracy over the unaided condition was realized with the adjusted CROS condition. On the other hand, localization of sounds from the back remained poor even with the use of the On/ Off switch. This again reinforces the observations that hearing-impaired people have difficulties localizing sounds from the back.12 In addition, it supports the contention that candidates for the CROS/BiCROS configuration have additional problems in localization from other directions.

How often do you turn off the CROS?

Table 1. Responses to one question examining study participants’ use of the CROS On/Off switch in their daily lives (n=9).

Eric Seper, AuD, is a research audiologist and Francis Kuk, PhD, is the director of the Widex Office of Research in Clinical Amplification (ORCA) in Lisle, Ill.?

Correspondence can be addressed to Dr Kuk at: [email protected] 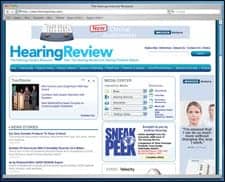 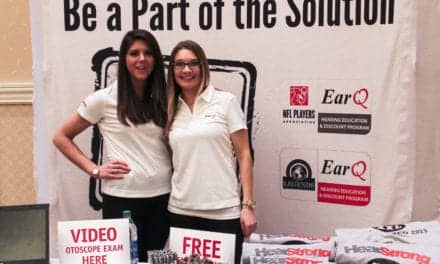