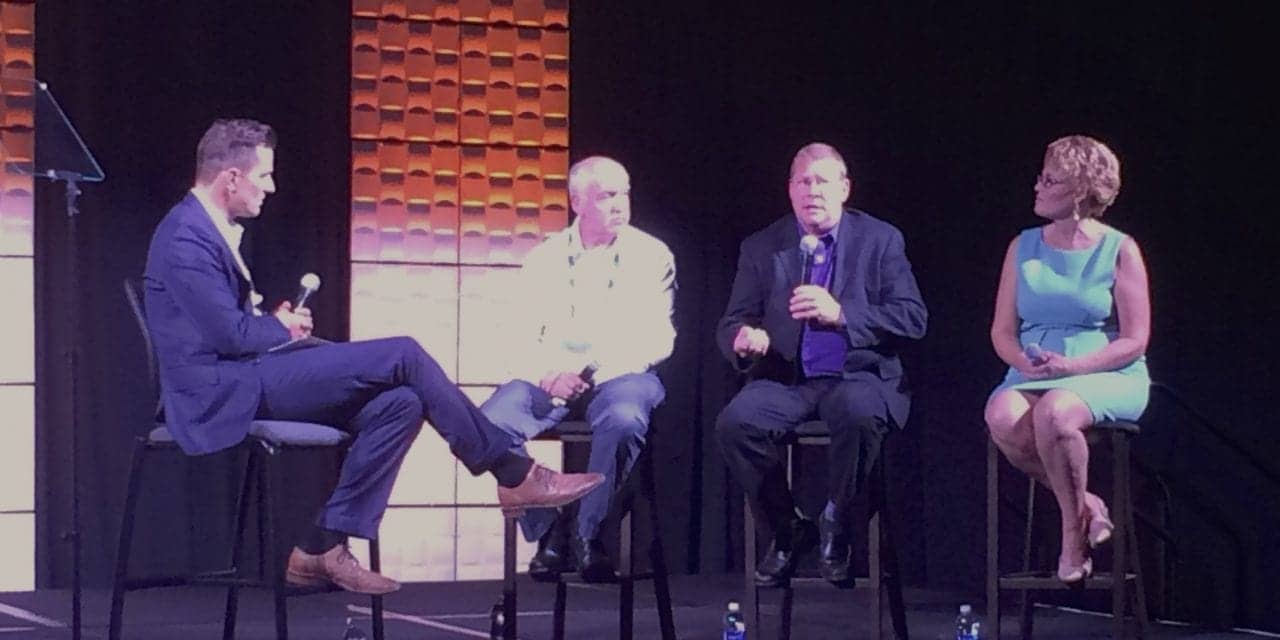 Over 400 hearing care professionals converged on the Chicago Hyatt Regency on September 8-10 for the 65th Annual International Hearing Society (IHS) convention. The 3-day event featured general sessions, seminars, and workshops on some of the hottest topics in hearing healthcare, ranging from ethics to dementia, while offering an exhibition hall with products and services from about 70 companies. 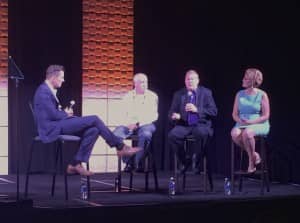 Bill Rancic spoke with hearing aid specialists John Hoglund, David Carr, and Belinda Gonzales about how they are finding success and separating their practices from the competition in today’s hearing healthcare market.

Two pre-convention workshops on Thursday, September 8, focused on safe ear impressions and aural rehabilitation. The evening featured a dinner and opening night presentation introduced by Starkey Hearing Technologies’ Brandon Sawalich and featuring Bill Rancic. As a winner of presidential nominee Donald Trump’s TV reality show, The Apprentice, Rancic deftly avoided politics and instead hosted a lively and informative presentation that included a panel of dispensing professionals who provided insights into their successful business strategies. In his introductory remarks, Rancic emphasized the need for entrepreneurs to have a keen focus on their goals and objectives, provide leadership, create value, and develop the skills of their staff members. The panel discussion with John Hoglund, BC-HIS, ACA, David Carr, BC-HIS, and Belinda Gonzales, provided real-life examples of how these dispensing professionals have separated themselves from the competition relative to customer service and community/physician outreach, built relationships with customers prior to their first visit, and improved their tested-not-treated rates. 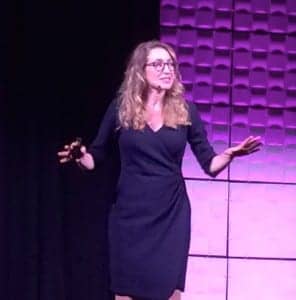 Dr Natalie Stavas tells her story about being a first-responder at the 2013 Boston Marathon bombing.

Saturday’s educational offerings included seminars on “Tinnitus Activities Treatment” by Shelly Witt, MA, of the University of Iowa, and “Think Globally in Your Practice” by the Starkey Hearing Foundation’s Tani Austin, BC-HIS, and H. William Noël III, BC-HIS, who covered the WFA® Fitting Method. At a keynote luncheon, Phonak’s new President Jan Metzdorff introduced Natalie Stavas, MD, a physician and runner who was hailed as a hero during the 2013 Boston Marathon terrorist attack. Dr Stavas spoke about how to tackle chaos and “tap into the human potential you were born with.”

A full slate of thorny issues for IHS. The Society’s Members Only Business Meeting was also held on Friday. Although the press was not allowed to attend, the meeting was not likely to have been a dull one. Just prior to the convention IHS announced a new Tinnitus Care Provider Certificate Program, which kicks off on December 2-3 in Orlando, Fla. The 2-day workshop series is reportedly based on a curriculum developed specifically by IHS in collaboration with tinnitus expert Richard Tyler, PhD, and an oversight committee of industry experts. The workshop focuses on tinnitus patient care involving the physiology, psychology, measurement, and management of the condition, and also covers establishing a tinnitus practice. IHS has also been involved in commenting on the recent President’s Council of Advisors on Science and Technology (PCAST) and National Academy of Sciences (NAS) recommendations for better affordability and accessibility to hearing aids (see the Special Report on p 8 of the July Hearing Review).

The Business Meeting also doubtessly provided background on the controversies surrounding the recent passage of The Veterans Mobility Safety Act of 2015 (HR 3471), which authorizes the Department of Veterans Affairs (VA) to hire hearing instrument specialists (see HR Online News on p 8). Another point of contention with the audiology organizations has been IHS’s Certification for National Guidelines for Apprenticeship Standards (National Guideline Standards) for the occupation of Hearing Aid Specialists. The program is administered through the US Department of Labor (DoL), and the Academy of Doctors of Audiology (ADA) believes that the description of the occupation of hearing aid specialists in the Work Process Schedule could encourage apprentices and journey workers to perform services and procedures outside their allowable scope of practice and licensure. ADA sent a letter to DoL Administrator John L. Ladd requesting rescission of the approval and certification.

Robert Withnell, PhD, and Sheena Tatum, AuD, of Indiana University present information on tympanometry and reflectance in the hearing clinic.

Finally, while achieving success, this year’s convention itself ended up being a source of controversy. Originally, the 2016 and 2017 conventions were to be combined with those of ADA into a single venue with separate programs, called the Unison Hearing Health Global Summits. Although ADA and IHS have not elaborated on what precipitated the collapse of Unison, it is well known that several influential members of both organizations made clear their opposition to the joint conference, and obviously the two organizations have clashed on many recent important issues, as detailed above, and ADA’s joint venture with Intricon in manufacturing the low-priced EarVenture hearing aid (see p 12 of the November 2015 Hearing Review) also complicated matters. ADA will be holding its convention on November 10-12 in San Diego.

By coincidence, the last time IHS scheduled its September convention to take place at the Chicago Hyatt Regency, it also experienced an unexpected scheduling change; 15 years ago, the events of 9/11 unfolded only days before IHS’s golden anniversary convention, necessitating the rescheduling of the convention to early November. 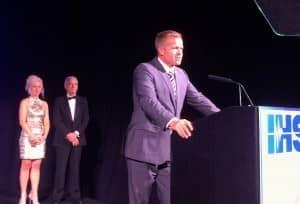 Heinz Ruch of Amplifon was honored with the James P. Lovell Award for his work in advancing the status and role of hearing care professionals, by hosts of the Gala, Leann Polhill and Alan Lowell, on behalf of IHS.

The Society’s James P. Lovell Award, which is awarded annually in recognition of ongoing efforts for advancing the status and role of hearing aid specialists, was presented to Heinz Ruch, executive vice-president of Amplifon US. According to Lowell, Ruch has displayed “faith and commitment” in IHS, challenging the Society to expand its membership program and address the industry’s need for more professionals to enter the field, while also pursuing higher levels of education and training for its members. Lowell also cited Ruch’s participation at the June 2 NAS day-long panel presentation as being the only viewpoint at that important meeting presented by the CEO of a global hearing aid company. As part of his acceptance speech, Ruch thanked IHS, applauded the progress hearing care professionals have made in hearing healthcare through the years, and he also announced that he had recently applied for US citizenship.

The Chapter of the Year Award was presented to the Alabama Society of Hearing Healthcare Professionals, represented by Richard (Dick) Kaiser of Discovery Hearing Aid Warranties and Howard Hancock. The newly invigorated organization increased its membership in the last 2 years from 20 to 85 members (350%), which is estimated to represent more than 59% of all licensed hearing aid specialists in Alabama. 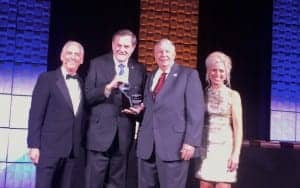 Alan Lowell and Leanne Polhill presented the IHS Chapter of the Year Award to the Alabama Society of Hearing Healthcare Professionals, represented by Dick Kaiser and Howard Hancock.

The Hearing Review presented its annual Professional Leadership Award to outgoing IHS President Scott Beall, AuD, ACA, BC-HIS. As an audiologist, hearing aid specialist, and second-generation practice owner, Dr Beall has sought to build bridges between the professions, while advocating for stringent standards of patient care from his 36 practices in 3 states—as well as for the entire profession. Richard Giles, ACA, BC-HIS, will take the helm as the new IHS president, with Todd Beyer, ACA, BC-HIS, becoming the new president-elect. 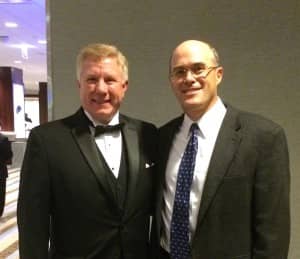 Special recognition was given to committee members responsible for IHS’s new Distance Learning for Professionals in Hearing Health Sciences curriculum, including Edward Lybarger, Doug Lewis, Kathy Harvey-Jones, Patricia Connelly, and Tammy Miller. The online course for people seeking entry into the hearing healthcare profession includes a textbook and workbook, along with an online learning system that features 39 tests, a revamped final exam, digital flashcards, relevant articles aligned to the lessons, and recorded webinars.

Next year in Atlanta. The 2017 IHS convention will be held on September 14-16 in Atlanta. For more information, visit: http://ihsinfo.org 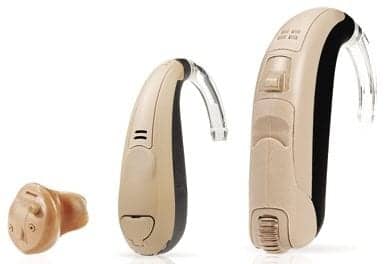 Sonic Turns on the Charm at EUHA 2013