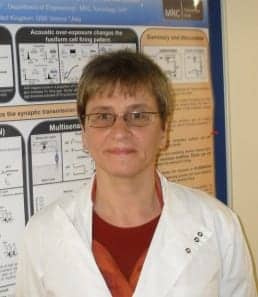 New research led by the University of Leicester has examined the cellular mechanisms that underlie hearing loss and tinnitus triggered by exposure to loud sound, demonstrating that physical changes in myelin itself —the coating of the auditory nerve carrying sound signals to the brain—affect our ability to hear.

“People who suffer from hearing loss have difficulties in understanding speech, particularly when the environment is noisy and when other people are talking nearby,” says Martine Hamann, PhD, Lecturer in Neurosciences at the University of Leicester. “Understanding speech relies on fast transmission of auditory signals. Therefore it is important to understand how the speed of signal transmission gets decreased during hearing loss. Understanding these underlying phenomena means that it could be possible to find medicines to improve auditory perception, specifically in noisy backgrounds.”

The research, funded by Action on Hearing Loss, and led by Leicester, was done in collaboration with Angus Brown, PhD, of the University of Nottingham. The paper, “Computational modelling of the effects of auditory nerve dysmyelination,” is published in the August 1, 2014 edition of Frontiers in Neuroanatomy.

In previous research, researchers have shown that after exposure to loud sounds leading to hearing loss, the myelin coat surrounding the auditory nerve becomes thinner. An important property of auditory signal transmission consists of electrical signals “jumping” from one myelin domain to the other. Those domains, called Nodes of Ranvier, become elongated after exposure to loud sound.

“Although we showed that transmission of auditory signals (electrical signals transmitted along the auditory nerve) was slowed down after exposure to loud sound leading to hearing loss,” says Hamann, “the question remained: Is this due to the actual change of the physical properties of the myelin or is it due to the redistribution of channels occurring subsequent to those changes?

“This work is a theoretical work whereby we tested the hypothesis that myelin was the prime reason for the decreased signal transmission,” continues Hamann. “We simulated how physical changes to the myelin and/or redistribution of channels influenced the signal transmission along the auditory nerve. We found that the redistribution of channels had only small effect on the conduction velocity whereas physical changes to myelin were primarily responsible for the effects.”

The research has reportedly shown for the first time the closer links between a deficit in the “myelin” sheath surrounding the auditory nerve and hearing loss. “This research is innovative because data modeling (simulations) was used on previous morphological data and assessed that physical changes to the myelin coat were the principal cause of the deficit,” said Hamann.

“We have come closer to understanding the reasons behind deficits in auditory perception. This means that we can also get closer to target those deficits, for example by promoting myelin repair after acoustic trauma or during age related hearing loss.”

Hamann said the work will help prevention, as well as aid progress in finding appropriate cures for hearing loss and possibly tinnitus. The next step is to test drugs that could promote myelin repair and improve hearing after hearing loss.

“There is an urgent need for effective treatments to prevent hearing loss— a condition that affects 10 million people in the UK and all too often isolates people from friends and family,” says Dr Ralph Holme, head of Biomedical Research at Action on Hearing Loss, a UK charity dedicated to funding research into hearing loss. “This research further increases our understanding of the biological consequences of exposure to loud noise. Knowledge that we hope will lead to effective treatments for hearing loss within a generation.”

The study was based on datasets that took over 3 years to acquire. The research followed a PhD studentship funded by Action on Hearing Loss.  Thomas Tagoe (CPP Dept) performed the electrophysiological experiments, and Matt Barker (CPP Dept) and Natalie Allcock (electron microscopy facility suite) performed the electron microscopy and the imaging experiments.

Hearing Review published a news article about Dr Hamann and her colleagues when they published a paper earlier this year in the February 12 edition of the Journal of Neuroscience.