A New Tool for Fighting Feedback in BTEs

As I examined her 7-year-old son’s earmolds, Mrs. Smith stood across the counter from me with a look that was part confusion, part disbelief, and part anger. “These were the best ones yet, but they still feed back,” she said struggling to hide the frustration in her voice. Her son Ryan has a profound hearing loss and he has continually experienced trouble with feedback. It doesn’t help that he grows out of his earmolds every 4 months. In this particular “round,” our tally reached 3 sets of impressions, and 4 remakes because of feedback and 1 remake because of comfort issues. It was his mother’s second trip back to my office—not including the 3 trips she made to her audiologist for fittings and impressions.

Ryan’s audiologist had tried everything she could think of doing, and I was running out of ideas myself. In addition to the optimal impression techniques and various strategies, we let the impression material thicken just before taking the impressions; the impressions were deep and had no seams or bubbles; we built up the impression and fit the mold with super-heavy tubing. For all our efforts Ryan’s earmolds still exhibited feedback.

From experience, I would be willing to wager that there’s not a dispensing professional who doesn’t have a patient similar to Ryan: a person whose ear was seemingly not made to accept a hearing aid without the threat of the aid making a loud, high-pitched squeal.

Stents to Combat Feedbackin BTEs
We know that feedback results when the sound produced by the hearing aid finds its way back to the microphone through acoustic leakage in the ear canal. This creates a feedback loop and the resulting “squeal” of the hearing aid in feedback.

Although it is possible for acoustic feedback to be caused by an improper ear hook and/or tube, the earmold is usually the culprit. In most cases, sound is able to leak between the patient’s earmold and canal wall, causing feedback. Improper fit can be the result of any number of things from impression-taking practices to improper build-up at the lab. Whether due to poorly rendered impressions, impression material shrinkage, not enough build-up on the mold, or growth by the patient, problem feedback cases usually involve an earmold that does not fit snugly enough in the ear to seal in the amplified sound.

Figure 1. The AntiFeedback System™ is designed as a simple solution to combat feedback in BTEs. A stent of variable size is inserted into the sound bore, slightly expanding the outer diameter of the soft mold. In many cases, this is a quick effective way to improve the acoustic seal.

The AntiFeedback System™ (Figure 1) is designed as a simple mechanical solution for feedback problems in BTE hearing aids. It involves a stent which, when placed into the sound bore of an earmold, slightly expands the outer diameter of the earmold to help reinforce the seal. The stents are suitable for most occluding BTE soft earmolds. Here’s how it works:

1) Determine which of the 4 stent sizes to use based on the severity of the feedback and the size of the patient’s ear canal.

2) If you are using a continuous flow adaptor (CFA) on your earmold, you will simply measure how deep to place the stent into the earmold using the insertion tool, and then insert it into the mold. Using a standard tube through the mold, you will have to trim about 1/4-inch off the tube by pulling it out of the top of the canal and trimming it before you insert the stent.

Generally it’s that simple. If you misjudged the severity of the leakage, you can still replace the stent with a larger one. The stent can be removed by using the extraction tool provided. You will then be able to repeat the above insertion process with a larger stent.

In preliminary field tests, the AntiFeedback System™ eliminated feedback problems in 16 out of 20 cases, and it reduced feedback significantly in 3 of the remaining 4 cases where feedback was not completely eliminated.

Conclusion
Despite our best efforts at eradicating feedback from hearing instruments, the fact is that some clients still have ear canals that pose challenges relative to feedback control. In using time-tested methods for impression taking, along with the stents described in this article, we believe that many of the toughest feedback cases can be solved. It should be noted that this system is not a “cure-all,” and it is not intended to be used in every BTE application. However it does represent a quick, inexpensive, and valuable option to have available when fighting feedback. 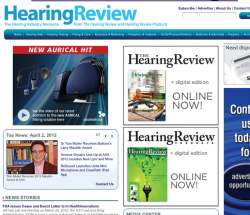