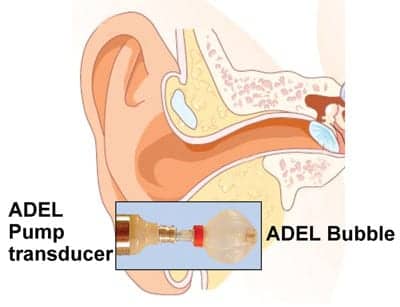 Work is continuing to further qualify the fundamental working principles of the Asius diaphonic valve and Ambrose diaphonic ear lens (ADEL)—the underlying technology behind a voice-activated expandable balloon-type “earmold.” ADEL is designed to harvest sound energy, inflating and self-regulating the balloon coupler with a minimum of attenuation and distortion. Preliminary results suggest the system does this with previously unrealized comfort, safety, and fidelity.

Many traditional and custom-made hearing aids achieve their acoustical seal and sound coupling to the ear via customization in which a silicone impression of the ear canal is used to fabricate a custom earmold for that ear. This core technology has remained essentially the same for the past 40 years, with only minor cosmetic and acoustic modifications.

Documented problems in the earmold fabrication process include the skill, time, and care required for taking good ear impressions; inconvenience to the patient in scheduling a time for impressions; the approximately 2-week wait for the earmold and hearing aid to be fabricated; safety issues related to the impression-taking process; earmold adjustment; remakes for poor fabrication, fit, and discomfort; and sound leakage around the earmold during jaw movement. Additionally, the above issues translate into extra costs for the patient. For hearing aids costing thousands of dollars per ear, the contribution cost of custom earmolds is estimated at $250 per ear, or $400 for a binaural fit.1

It is true that many current hearing aids are of the open-fit or receiver-in-the-canal (RIC) styles that utilize domes of different sizes to direct sound into the ear canal and can be fitted instantly. However, as the hearing loss becomes more severe, judicious style selection requires the recommendation of a custom earmold in order to manage the delivery of greater sound pressure for these hearing losses.

While very useful, open fittings also have their own unique drawbacks. An open fitting provides essentially no protection to the ear from loud sounds, because loud sounds bypass the earpiece and are heard directly, regardless of what the hearing aid electronics do in reducing them. Additionally, open fittings can reduce the effectiveness of some technologies designed to reduce the level of unwanted sounds, such as directional microphones and digital noise reduction.

In today’s hearing aid fitting regimen, more time may be spent fitting the earmold to a patient than spent on the actual fitting of the electroacoustics of the hearing aid. As a result—even if hearing aid manufacturing costs are reduced through innovations like instant-fit BTEs and RICs—earmold coupling and its associated costs and problems remain unchanged for a large percentage of people with hearing impairment.

An Inflatable Ear Coupling Asius Technologies LLC has developed and applied for patent protection for a unique portfolio of technologies that is expected to allow coupling of audio signals into the human ear with previously unrealized comfort, safety, and fidelity.2-7 The core element of this technology is the Ambrose Diaphonic Ear Lens, or ADEL™, that harvests the energy available in sound waves to perform useful work, such as pumping an expandable balloon. The diaphonic ear lens (valve) passes the sound of the program material (music, voice, etc) through the valve, into the balloon, and thus into the ear canal with a minimum of attenuation and distortion. This transformation of energy from an acoustic signal to perform work has not been achieved previously.

The ADEL device is designed to circumvent the problems associated with traditional earmolds, and at the same time offers some additional advantages:

There is also potential for:

Safety issues and fabrication problems associated with making an ear impression and a finished earmold are eliminated. ADEL is a user voice-activated expandable balloon that provides an acoustical seal and coupling of an audio device (hearing aid) to the listener’s ear.

The ADEL inflatable ear coupling (Figure 1) provides the ability to fit virtually any ear canal with a single, non-custom device. Additionally, preliminary data demonstrate that this is expected to provide a one-size-fits-all device that delivers much better user comfort and sound quality than custom earmolds. 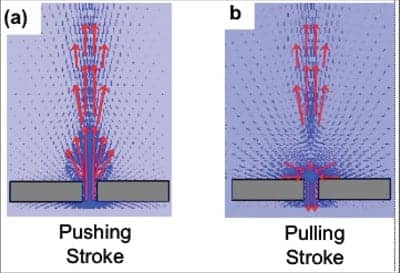 Regarding comfort, the self-regulating pliable ADEL balloon, which has a high tensile strength, puts far less pressure on sensitive ear canal walls than molded plastic inserts in conventional devices. Theoretically, the ADEL balloon is expected to produce richer, fuller sound quality because it acts as a resonating chamber—like the body of an acoustic guitar—within the ear canal. The flexible and expandable nature of this balloon potentially allows it to do something most resonating chambers cannot: change its volume and thus its resonant characteristics to fine-tune sound quality.

How ADEL Works A key component of Asius’ technology is the pressure source—a diaphonic valve—used to inflate the ADEL bubble in the ear. The diaphonic valve harvests sound energy from the audio device (hearing aid speaker) to pump air into the bubble, while not compromising the sound quality produced by the device.

A feature of a sound wave traveling through air is compression zones of increased air pressure alternating with rarefaction zones of decreased pressure. Although sound waves carry these “packets” of increased pressure, it is not generally possible to do work, such as moving objects or materials with sound. This is because each push of pressure is followed by a corresponding pull from the next rarefaction.

Asius’ diaphonic valve technology provides a unique approach to capturing sound pressure energy to do mechanical work. The current application of this is to pump air into the ADEL balloon in a listener’s ear.

Synthetic jets. The diaphonic valve is a device for converting acoustical vibrations (sound) into static pressure. In other words, it is a pump that transports air or another fluid and pressurizes air or another fluid using acoustical vibrations (sound) as its power source. The diaphonic valve takes a known technology, the synthetic jet,8 and alters its configuration to expand its efficiency and utility.

Figure 2 illustrates how a synthetic jet is created when fluid or gas is alternately pushed and pulled through a small orifice. As shown in Figure 2a, when the fluid is pushed out through the orifice, it exits as a narrow, directed jet, which is expelled directly away from the surface containing the orifice. On the pulling stroke, as shown in Figure 2b, when the fluid is pulled back through the same orifice, the flow field is much different; like fluid going down a drain, it enters the orifice mainly from the sides. Even when the amount of fluid pushed and pulled through the orifice on each alternating cycle is the same (and thus there is no net flow of material through the orifice), the asymmetry in the flow fields caused by the push cycle (Figure 2a) and the pull cycle (Figure 2b) results in a net flow of fluid away from the face of the surface containing the orifice. At a distance beyond the surface equal to a large number of orifice diameters, the synthetic jet produces a near-continuous jet or motion of fluid, which is difficult to distinguish from a conventional jet such as a hose expelling liquid or gas under a driving pressure force.

Inflating a balloon ear coupler. A synthetic jet moves fluid and can exert forces through a jet of fluid/air. However, a synthetic jet is an open system in which the fluid source for the device and the jet produced both reside in the same continuous fluid medium.8 Consequently, there is no way for a conventional synthetic jet to create a static pressure in fluid—a pressure that can, for instance, inflate a balloon. This is because the jet and the source of fluid around the sides of the orifice are not isolated from one another and thus can and do exchange pressure. Any increase in pressure in the downstream jet is lost through transfer to the surrounding fluid, and likewise any decrease in pressure around the edges of the synthetic jet orifice also is lost through pressure transfer from the surrounding fluid.

Through use of the Asius diaphonic valve, both positive pressure in the jet and negative pressures at the sides of the synthetic jet orifice may be directed or stored in closed systems, and therefore isolated from each other. Accumulated pressures and/or vacuums may thereby be directed to do work.

Figure 4 shows a graph of static pressure generated by an Asius diaphonic valve as a function of sound frequency; for this particular device, a maximum pressure of 1.2 kPa is generated at about 3 kHz. In order to produce the most compact ADEL system for insertion into the ear canal, Asius has designed and constructed a flat diaphonic valve, which mounts to the side of a type of tiny speaker (balanced armature transducer) used in hearing aids. 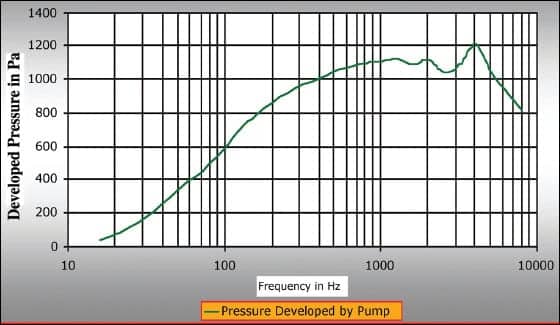 FIGURE 4. Pressure generated by a diaphonic valve as a function of sound frequency.

Layer 3 of the flat diaphonic valve is a rigid frame with an open center. This central region is spanned by a thin and flexible polymer membrane or film, which has a flap covering the synthetic jet orifice, cut into it. Layer 4 is a top plate or cover for the diaphonic valve. This cover contains an egress port by which air pumped by the diaphonic valve exits the device.

As indicated by Figure 4, a single diaphonic valve assembly can boost pressure only so much—slightly more than 1 kPa. However, Asius has shown that higher pressures can be obtained by connecting diaphonic valves in series; the pressurized output of one diaphonic valve becomes the input for the next, and so on. 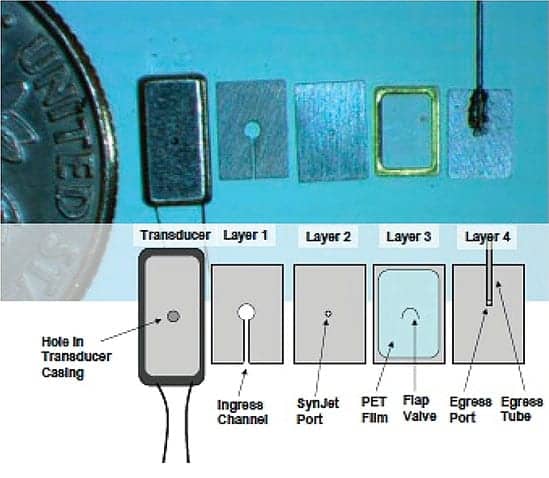 Work is continuing to further qualify the fundamental working principles of the Asius diaphonic valve and ADEL coupler for generating pressure (work) from sound generated by a group of subjects, and to provide for iterative improvements resulting from ongoing study. Current performance data shows a correlation between laboratory expectations and human subject observations, both with Asius personnel and confirmed with a cross section of major hearing aid manufacturers. Because these measurements have been made on a small group of interested personnel, further study is being conducted on a larger cross section of the population.

This article describes the continuing development of a new acoustical seal and coupling technology for hearing devices. The transformation of energy from an acoustic signal to perform work—as the ADEL system provides—has not been achieved previously.

The core element of ADEL is a voice-activated expandable balloon that harvests the energy available in sound waves to perform useful work: the pumping and self-regulating of the inflatable balloon in the ear canal with a minimum of attenuation and distortion. Preliminary data suggests it does this with previously unrealized comfort, safety, and fidelity.

The ADEL is designed to circumvent problems associated with traditional earmolds and impression taking. Its potential advantages include solutions to many of the traditional drawbacks of custom earmolds, as well as the inclusion of many of the benefits of instant/open-fit devices.

The ADEL is expected to eliminate safety issues related to taking an ear impression (ie, perforated eardrums, bleeding of the canal for patients taking blood thinners, etc), and for those wearing hard acrylic earmolds (eg, a blow to the ear against a hard earpiece can cut the ear canal and cause bleeding and severe discomfort, among other things). Additionally, remakes and modifications often required by a custom earpiece would be eliminated.