The Textbook of Hearing Aid Amplification is designed to update the Handbook of Hearing Aid Amplification, a two-volume set originally published by Sandlin in 1988 that featured theoretical, clinical and fitting considerations of hearing instruments, assistive devices and cochlear implants. The Handbook quickly became something of a “classic” in the hearing and fitting sciences literature, as it contained an amazing breadth of information from some of the industry’s most-respected researchers and educators.

With the new Textbook of Hearing Aid Amplification, Sandlin can be seen continuing the Handbook’s tradition by providing an excellent selection of articles on today’s most pressing issues. The book contains a mix of old and new. For example, as with the Handbook, a historical review of the industry is provided by Samuel and Edward Lybarger, background on hi-fidelity principles of hearing instruments is provided by Mead Killion and Laurel Christensen, CAPDs and amplification considerations are detailed by Brad Stach, special considerations when fitting older clients are dealt with by Robert Novak, and Sandlin offers information on soundfield assessment and also looks at current issues in dispensing hearing instruments.

Sandlin is a well-known and respected researcher, dispenser and educator who runs a practice and is also adjunct professor of audiology at San Diego State Univ. In his preface, he discusses a comment he made in Vol. 2 of the former Handbook: “Clinical approaches to the selection, fitting and verification of hearing aid devices used by individuals with acoustic impairments often have appeared contradictory or less than absolute in meeting needs of persons who use amplification. The text is not intended to offer a resolution to all of the differences existing in decision-making processes regarding hearing aids, but rather to present ideas and clinical experiences of those professionals who deserve to be heard.” Citing the above text, Sandlin remarks that this is also true of the current Textbook of Hearing Aid Amplification and sets the stage for an exceptional collection of information that will likely be kept and referred to well into the decade.

Aural Rehabilitation has become one of the most popular texts on this subject in the hearing care field. Now in its fourth edition, the book has found its way into many classrooms, as well as onto the shelves of hearing care professionals.

Hull, a professor at Wichita State Univ. in Kansas, has done an admirable job in assembling down-to-earth, practical topics on aural rehabilitation. One of the books great strengths is its organization into five basic parts: 1) Introduction to Aural Rehabilitation; 2) Aural Habilitation: Children Who Are Hearing Impaired; 3) Aural Rehabilitation: Adults Who Are Hearing Impaired; 4) Considerations for the Older Adult Client and 5) Evaluation in the Aural Rehabilitation Process. The logical sequence of these parts, complemented by a similar structure of the chapters within each part, make for exceptionally clear presentation of the material. In general, the theoretical aspects of aural rehabilitation are presented alongside the practical aspects so that clinicians are able to immediately apply the knowledge to their own workplace situations. Hull has authored several of the chapters, and other contributors include Jack Katz, Joseph Smaldino, William Hodgson, Jill Bader, Daniel Ling, Frederick Berg, Harriet Kaplan, Robert Lightfoot and James Maurer. Among many fine chapters in the book on the subject of aural rehabilitation is a startling article by Pamela Jackson and Karen Dilka that includes the consequences of untreated hearing loss relative on educational, social and economic status—the information should be sent to every general practitioner and legislator in the world.

The book concludes with an appendix that contains 13 popular assessment tools and performance scales, such as the CID Everyday Sentences list, Denver Scale of Handicap Function and the Hearing Handicap Inventory for the Elderly.

It’s well known that, as the first baby-boomers officially start receiving their subscriptions to Modern Maturity, the country is in the beginnings of a population explosion of seniors. If you ever wanted a national or state-by-state statistic on people age-55 or older relative to gender, religion, education, economic and social parameters, this may be the book for you. It is filled with tables and charts that detail a range of demographic aspects about older adults. 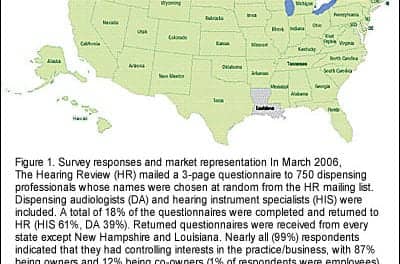