According to the company announcement, its Beltone Boost, released in 2014, offers a range of advanced sound processing features designed for challenging listening situations, including Feedback Eraser, CrossLink Directionality, and Sound Shifter. The company reports that these features help wearers control their hearing experience and reconnect with sounds or conversations they might have been missing.

The award-winning design features a compact, ergonomic shape and HPF NanoBlock technology, and an environmental protective coating that seals the entire instrument and protects it from moisture, sweat, and dirt. The company says Beltone Boost wearers also benefit from Made for iPhone integration that allows them to discreetly control their hearing aids through their iPhone, iPad or iPod touch without an adapter or intermediary device. Wearers can also use Beltone Boost as wireless headphones to talk on the phone, use FaceTime, listen to music, and receive GPS directions directly through the hearing aids. The Beltone HearPlus app offers additional customizable hearing options.

“For 60 years, the most-respected design experts have been convening every year in Essen to seek out the best designs,” said Professor Peter Zec, founder and CEO of the Red Dot Award. “This year we had a record number of almost 5,000 entries – a huge amount of work for our jury members, who assessed each individual product. The laureates of the Red Dot Award: Product Design 2015 have demonstrated exceptionally high achievements and have thus been deservedly successful in the world’s largest design competition.”

The Red Dot Award was created by Design Zentrum Nordrhein Westfalen and, with around 17,000 entries each year, is one of the best-respected design competitions in the world. In 2015, it is celebrating its 60th anniversary: It was in 1955 that a jury convened for the first time to assess the best designs of the day. The “Red Dot” award is considered by many to be an international seal of outstanding design quality. 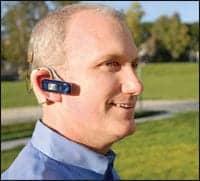 Breaking the Silence with Bluetooth Technology

What a Formula 1 Race Does to Your Eardrums

APD Test Battery Gets Boost With Launch of LiSN-S Test