In a new study in animals, University of Michigan researchers report that a combination of high doses of vitamins A, C, and E and magnesium, taken one hour before noise exposure and continued as a once-daily treatment for five days, was very effective at preventing permanent noise-induced hearing loss. The animals had prolonged exposure to sounds as loud as a jet engine at take-off at close range.

Clinical trials of a hearing-protection tablet or snack bar for people could begin soon, and if successful such a product could be available in as little as two years, says Josef M. Miller, Ph.D., the senior author of the study, which is published online in the journal Free Radical Biology and Medicine. Miller is a professor in the Department of Otolaryngology at the U-M Medical School, and former director of the U-M Health System’s Kresge Hearing Research Institute, where the study was performed.

"These agents have been used for many years, but not for hearing loss. We know they’re safe, so that opens the door to push ahead with clinical trials with confidence we’re not going to do any harm," says Miller.

The formulation the researchers used built on earlier animal studies showing that single antioxidant vitamins were somewhat effective in preventing hearing loss, and on studies of Israeli soldiers given magnesium many days prior to exposure, who gained relatively small protective effects.

In the U-M study, noise-induced hearing loss was measured in four groups of guinea pigs treated with the antioxidant vitamins A, C and E, magnesium alone, an ACE-magnesium combination, or a placebo. The treatments began one hour before a five-hour exposure to 120 decibel (dB) sound pressure level noise, and continued once daily for five days.

The group given the combined treatments of vitamins A, C and E and magnesium showed significantly less noise-induced hearing loss than all of the other groups.

"Vitamins A, C and E and magnesium worked in synergy to prevent cell damage," explains Colleen G. Le Prell, Ph.D., the study’s lead author and a research investigator at the U-M Kresge Hearing Research Institute. According to the researchers, pre-treatment presumably reduced reactive elements called free radicals that form during and after noise exposure and noise-induced constriction of blood flow to the inner ear, and may have also reduced neural excitotoxicity, or the damage to auditory neurons that can occur due to over-stimulation. The post-noise nutrient doses apparently "scavenged" free radicals that continue to form long-after after this noise exposure ends.

In the past 10 years, scientists have learned that noise-induced hearing loss occurs in part because cell mitochondria in the ear churn out damaging free radicals in response to loud sounds. "Free radical formation bursts initially, then peaks again during the days after exposure," explains Le Prell.

The antioxidant vitamins and magnesium used in the study are widely used dietary supplements, not new drugs, and therefore they don’t require the extensive safety tests required for new drug entities prior to use in clinical trials. The doses to be used in proposed human trials will be within the ranges considered safe according to the Institute of Medicine and federal nutrition guidelines.

"Ultimately, we envision soldiers would have a nutritional bar with meals and it would give them adequate daily protection," says Miller. Similar bars with other formulations are already given to soldiers to help them withstand hot weather and other war zone conditions.

"Other people would likely benefit by consuming a pill or nutritional bar before going to work in noisy environments, or attending noisy events like NASCAR races or rock concerts, or even using an iPod or other music player," says Le Prell. "Based on an earlier study with other antioxidant agents, we think this micronutrient combination will work even post-noise."

That study suggested a "morning after" treatment, that might minimize hearing damage for soldiers, musicians, pilots, construction workers and others – even if they don’t take it until after they experience dangerous noise levels. It was highlighted by the National Institutes of Health on the NIDCD website here.

If effective, such pre- and post-noise treatments could have far-reaching effects. About 30 million Americans regularly experience hazardous noise levels at work and at home, according to the National Institute on Deafness and Communications Disorders. Hunting, snowmobiling, using machines such as leaf blowers, lawnmowers and power tools, and attending or playing in loud music concerts commonly expose people to dangerous noise levels. Noise levels above 85 decibels damage hearing. About 28 million Americans have some degree of hearing loss. For about a third of them, noise accounts at least in part for their loss.

The U-M study also adds strength to research efforts under way in many research centers to learn how these nutrients might be used to treat many illnesses. "Similar combinations have been very effective in preventing macular degeneration, and many of these agents have been used with Alzheimer’s and Parkinson’s diseases, stroke-like ischemia, and other conditions that involve neural degeneration," Le Prell says. "You’re always hoping as a basic scientist to find a commonality like that, across other disease processes," says Miller.

A New Tool for Fighting Feedback in BTEs 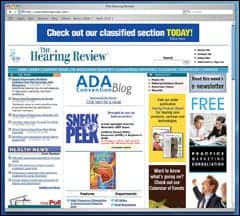