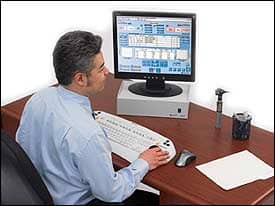 No matter what audiology specialty is practiced in an office, the equipment used plays a vital role in workflow efficiency. Every minute saved from lengthy processes, such as generating reports, translates into valuable time working directly with patients.

“A lot of audiologists are looking at the person’s whole hearing health,” says Jen Duffey, AuD, staff audiologist for Maico Diagnostics, Eden Prairie, Minn. “In addition to fitting hearing aids, they’re also educating patients about hearing loss and noise exposure, showing them how to take proper precautions and preserve their hearing, fitting them with hearing protection devices, and counseling them on communication strategies, or even conducting aural rehab. It’s a whole program.”

To meet the demands of an increasing patient load, audiologists can’t afford to use equipment that slows them down. While many offices depend on stand-alone devices for testing, demand is on the rise for equipment with combined functionality, as well as computer-integrated products to help streamline workflow.

There is no “one size fits all,” however—finding the right devices for an office means understanding the unique demands of the workload.

While the equipment setup used depends on the particular practice and workflow, most audiologists work with the same types of devices, including audiometers, tympanometers, and hearing test booths—all of the basic equipment to perform testing, regardless of whether an audiologist focuses on diagnostics or fitting hearing aids.

Before purchasing equipment, audiologists must consider their own priorities. “There’s equipment out there that meets all of those needs,” says David Adlin, national sales manager for Maico Diagnostics.

For example, there are special device considerations for audiologists who fit hearing aids. “Many will have a hearing instrument test box, so that they’ll be able to make sure the instruments are working properly and that they can take measurements on them,” Duffey says. “Many people are conducting real-ear measurements, taking measurements right in the patient’s ear with the hearing aid in, so that they can take the acoustics of that person’s ear into account.”

The equipment needed also depends on the tests an audiologist performs, as well as the unique requirements of the patient population being served. “When you bring otoacoustic emissions (OAE) into the test battery, there’s information that the OAE can give you that the audiometer can’t, and vice versa,” Adlin says. “If an audiologist is testing children, [he or she] might want to use an ABR alongside the OAE.”

No matter what they choose, audiologists want reliable devices that are easy to use. “They’re seeing a lot of patients, and they want to be confident in the results that they’re getting,” Duffey says. “Speed is also important, as well as accuracy. If you’re testing children, for instance, speed is incredibly important because sometimes you have a very small time window in which you can catch information from them.”

To make sure that the equipment is right for a particular office, Duffey recommends consulting local distributors and trying out a product before buying, when possible. “It is important to be able to look at the equipment, use it, feel it, and see how it would fit into your office,” she says.

Until recently, audiologists had to purchase a different device for each desired function. Now, manufacturers sometimes integrate more than one module into a single piece of equipment.

“There are some integrated pieces of equipment that bring the audiologist’s needs into one system, where you would find an audiometer, a tympanometer, and an OAE system all in one,” Adlin says. For example, this summer, Maico Diagnostics will launch the Ero-Scan Pro, a handheld OAE/tympanometer that incorporates a full OAE diagnostic system and offers selectable tympanometry. The device is designed to accommodate user needs from screening to clinical research.

Combining devices into one casing can have many advantages, particularly freeing up office space. It is also convenient for audiologists who have to travel. Still, combined models are not for everyone.

“Some clinics may have different types of evaluations in different rooms,” Duffey says. “For instance, they’ll do their hearing test, or their audiometry tests in one room with the sound booth, and then they’ll go to another room to do hearing aid fittings. Sometimes having separate equipment works for them.”

While most audiologists still use stand-alone equipment, there is an increasing interest in integrated technologies—especially PC-based devices that allow audiologists to automatically save, store, and present data on their computers. This technology is particularly popular among new audiologists, who often trained on PC-based systems.

“The PC is playing more of an integral part [in] the hearing testing process,” Adlin says. “In the early ’90s, equipment was stand-alone—we all had dedicated instrumentation, and the term ‘open architecture’ really hadn’t caught on yet. Equipment can now link or communicate with other equipment—you’re not confined to just the one dedicated piece of equipment.”

Linking devices, such as audiometers, directly to the computer helps eliminate human error during data entry and reduces the time it takes to produce reports. “You’re instantly storing your results as you’re testing the patient; then you have a printed report at the end of the test session,” Duffey says. “So it saves a lot of time. You don’t have to reenter an audiogram by hand into a module for a hearing aid fitting. The thresholds from the audiogram are already stored in a database that can be used for a hearing aid fitting. A lot of little things like that can add up, especially when you’re seeing a high volume of patients.”

PC-based devices also open up communication opportunities between audiologists and their patients. As of press time, Maico was planning to launch the Maestro in July, a PC-based, two-channel audiometer that integrates several tests that audiologists can present interactively to their patients on the computer screen. The unit features QuickSIN, a speech-in-noise test; built-in word lists in English and Spanish; and other patient consultation features such as speech sounds. Maestro has full reporting capabilities and can interface with NOAH software. Even with the additional functionality, the Maestro has the look and feel of a one-button, one-function audiometer.

“We’re seeing that it’s becoming popular to do patient consulting with the ability to sit in front of a flat screen that has the results of the patient’s audiogram,” Adlin says. “There are different communication tools on display that the audiologist can use to help explain the test results to the patient in ways that they couldn’t before.”

PC-based audiology devices do not necessarily use the same software, which can be frustrating, especially if an audiologist wants to use data from one module to generate a report in another. To help eliminate these inconveniences, GN Otometrics, Taastrup, Denmark, developed OTOsuite™, a software universe designed to centrally support diagnostics, audiometry, immittance, simulation, and speech mapping.

“It is focused on the diagnostic and fitting process,” says Michel Jürgens, product manager for GN Otometrics. “Instead of having separate software for the audiometer, the immittance device, simulation, and speech mapping, you have one software that connects your individual devices and allows you to navigate freely [among] these modules.”

GN Otometrics intends to expand the software to cover more audiology modules. “We are trying to integrate more instruments into the same software universe,” Jürgens says. “OTOsuite in fact forms the backbone of product development in GN Otometrics. The more modules people have, the greater the benefits.”

The software interfaces with GN Otometrics equipment, such as the company’s AURICAL audiometer. With a smart link, the audiometer connects directly to the software. “Everything you do on the audiometer is shown on the screen. The data is saved directly into the software, and you can reuse that for speech mapping,” Jürgens says. “If you do your audiometric testing and then you want to do immittance, then you can view the audiograms in the immittance module as well.”

When audiologists perform tests, they can save the data in their preferred format, print out reports, display reports, or even combine reports—all within the same interface. “The audiologist does not have to open up different applications,” Jürgens says. “You have one familiar user interface for several instruments.”

Audiologists can adopt OTOsuite gradually. “Very few people exchange their whole instrumentation setup,” says Søren Holst, president of GN Otometrics. “We recommend developing a plan for how to move into integration.” Audiologists can start with one device that interfaces with OTOsuite and then purchase licenses for the other modules when they replace their equipment down the road.

Holst says OTOsuite, which debuted at the American Academy of Audiology convention in Denver this past April, is simple to use. “It’s self-explanatory; you don’t need a manual,” he says. “Once you have learned one feature, you will be able to use it in a different application without thinking about it.”

As computers continue to play a larger role in audiology offices, manufacturers expect that PC integration and combined models will increase in popularity. Currently, stand-alone units still account for the majority of equipment in audiologists’ offices—a trend that can be attributed to a number of factors, including audiologists’ comfort levels with their existing equipment and even the cost barrier in some cases. However, the trend is gradually shifting toward integrated instrumentation.

“The migration up to PC-based systems is slow, but it is happening,” Adlin says. “It is the future of clinical testing.”

With more efficient interaction among devices, audiologists will be able to make more time for an increasing patient population.

“More people will be demanding the services of audiologists,” Holst says. “They will want to have the best possible service. That puts a lot of pressure on the audiologist. We believe we should provide the tools so audiologists can spend more time with their patients and not with paperwork.”

Measure and Intervene: An In-Ear Dosimetry Method That Can Change an OSHA Violation—and Internal Attitudes