Sales Up, But Mostly from VA

In the first half of 2009, net hearing aid unit sales increased by 4.73% compared to the same period last year, according to statistics generated by the Hearing Industries Association (HIA). However, when dispensing activity from the Department of Veterans Affairs (VA) is ignored, private sector hearing aid sales growth was only 1.7% in the first half compared to last year. (It should be recognized that Hansaton became an HIA reporting member for the first time beginning in January, so actual sales growth is probably lower.)

During the second quarter, overall unit sales increased by 6.8% (year-on-year), building on sales growth of 3.41% in the first quarter. Again, private sector sales growth was comparatively lower, increasing by 1.82% in the second quarter, after flat sales (0.43%) in the first quarter. Although the private sector isn’t setting the world on fire, it is worth noting that conditions have improved significantly compared to the last three quarters of 2008, when the market experienced sales decreases from -1 to -7%, for a unit volume decrease of -2.48%.

Obvious in these figures is the amazing dispensing activity at the VA, which has increased its unit volumes by more than 25% during the first half of 2009. For the first time, the VA surpassed the 100,000 unit mark in quarterly units in the first quarter, and its dispensing activity now accounts for almost 1-in-5 (18%) of all of the hearing aids dispensed in the United States. According to Lucille Beck, PhD, national director of the Audiology and Speech Pathology Service for the VA, the agency likens the current period to a “shifting paradigm” of casualties from the wars in Iraq and Afghanistan (more than one-fifth of their new patients), which include younger soldiers with blast and head-trauma injuries, as well as an aging population of 74.5 million veterans and benefits-eligible people, many of whom also have hearing loss and tinnitus. At the HIA Annual Members Meeting in February, Dr Beck reported that the VA has 729 audiologists and 195 hearing technicians, as well as 15 research audiologists on its staff, attending to more than 1.1 million “patient encounters” each year. In essence, the VA is experiencing a “perfect storm” of demand for its services.

Best wishes to Jerry Laux. Although I’m usually not in the habit of extolling the virtues of our competitors at The Hearing Journal, the retirement of HJ Publisher Jerry Laux at the end of June certainly merits recognition. Jerry occupies an historic place in the hearing trade publishing field with his nearly 30 years of service. As publisher, he has worked “behind the scenes” in what is too often a thankless, delicate, and taxing job. He and his brothers purchased HJ in the early 80s, and they ran the magazine for several years before selling it to Williams & Wilkins, which then persuaded Jerry to stay on as publisher. Because we often cover many of the same industry events, I think it’s fair to say that there isn’t another person on Earth (except perhaps HJ Editor David Kirkwood) with whom I’ve eaten so much banquet food or scribbled so many notes next to. Through the 15 years that I’ve worked beside (and, yes, against) Jerry, we’ve come to know each other well, trade industry lore, and joke about jostling each other’s cameras while offering good-natured jabs at the other’s “rag.” Through it all, I’ve always considered him a gentleman and a friend. And I will sincerely miss his company. The staff of HR wishes Jerry and his beloved wife Marilyn the very best in retirement. HJ’s Manager of Advertising Sales Martha McGarity, who has worked beside Jerry for several years, assumed his responsibilities in July.

Friendly health warning. I try to stick to hearing-related issues in my editorials, but I’m going to diverge from this policy for a moment. I recently came down with what was almost certainly the H1N1 swine flu virus (although it was never officially confirmed). This is about as nasty a flu as I’ve ever experienced—high temperatures and horrific congestion for a week. With two young children in daycare and a job with draconian deadlines, I usually try to slog through the continuous samba line of cold and flu viruses that march through our household. But my hard-won advice is this: at least while this pandemic is sweeping the nation—if you feel like you’re coming down with a cold (particularly if your lungs are filling up quickly), don’t ignore it. Stay home, rest, and treat it seriously. If I can contract H1N1 in Duluth, Minn (a city that is not at “the edge of the world,” but you can see it from here), I believe everyone is at risk. So use caution! You’ll be doing yourself, your co-workers, and your family a big favor. 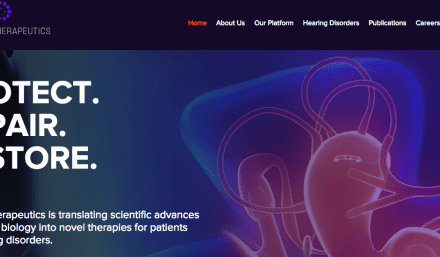