Recent research from the Seoul National Univ. College of Medicine in Korea focuses on PET (positron emission tomography) brain scans of 15 prelingually deaf patients before and after cochlear implantation (CI). These brain scans were compared to 17 normal-hearing adults relative to glucose metabolism and activity in the auditory cortex.

The term “cross-modal plasticity” refers to stimuli that activates areas of the brain that are typically associated with a related sense (e.g., sign language activating the auditory cortex in much the same way that sound stimuli does). The PET scans presented in this article suggest that when “metabolism in the auditory cortex of prelingually deaf children…has been restored by cross-modal plasticity, the auditory cortex can no longer respond to signals from a cochlear implant installed afterwards.” In other words, the researchers believe that increased cross-modality negatively affects the amount of benefit that can be gained from a cochlear implant.

In the study’s PET scans of the 15 deaf subjects, the researchers found that the degree of activity in the auditory cortex prior to the CI operation was inversely related to the amount of hearing improvement (judged by using Korean-version CID word tests) after cochlear implantation. “The increased neuronal activity of the auditory cortex, manifesting as an increase in blood flow and glucose metabolism, implicates cross-modal plasticity as the cause of the continuing lack of hearing response in these prelingually deaf patients,” state the researchers.

The article points out that cross-modal plasticity is present in congenitally blind patients, but not in patents who have acquired blindness. The researchers contend that “if cross-modal plasticity restores metabolism in the auditory cortex before implantation, prelingually deaf patients will show no improvement in hearing function, even after successful implantation and concentrated rehabilitation.” The authors offer several revealing PET scans that are differentiated by the duration of deafness (i.e., the degree to which cross-modality may have occurred [range: 6.5-20.3 yrs.]) and CID scores (90-0% correct).

While most college English majors were told by their professors that Oscar Wilde, the brilliant Irish playwright and general “bad-boy” of English Lit 101, died of syphilis at the turn of the century, it now appears that Wilde almost certainly died of meningoencephalitis secondary to chronic middle-ear disease. According to researchers Ashley Robins & Sean Sellars of Cape Town, South Africa, there is no evidence or mention of syphilis from the records of Reading Prison doctors in London (where Wilde was incarcerated on the charge of indecency). The symptoms of the ailment would have been well known to prison doctors of that time.

In an analysis of Wilde’s health that roughly dates from 1882 to his death in 1900, the authors provide an excellent glimpse into treatment methods (or lack thereof) for middle ear problems—as well as the appalling mistreatment of prisoners—during turn-of-the-century England. While in prison, Wilde’s continual complaints of drainage and almost total deafness in his right ear due to a perforated eardrum were largely ignored. The only treatment for his ear problem was three syringes of plain water, and statements by the prison doctor contend that the malady posed no real threat. His treatment by the doctors prompted Wilde to characterize them as “brutal in manner, coarse in temperament, and utterly indifferent to the health of the prisoners or their comfort.” The ear infection was eventually relieved in 1896 through a wash of “carbolic lotion.” However, the “relapsing infection, fetid otorrhea and otalgia indicated a cholesteatoma,” state the researchers.

In 1900, Wilde found himself out of prison and in Paris, where he sought out a well-known specialist in ear, nose and throat diseases. This doctor visited him 68 times. Eventually recognizing that the infection was not responding to any treatment and was life-threatening, the specialist referred Wilde to a leading surgeon of the day. Unfortunately, by this time, the latent otitis media had progressed and an “acute-on-chronic infection” of the disease extended into the mastoid. As Wilde recorded in his last letter, his surgeon informed him that “unless I was operated on immediately it would be too late, and that the consequences of the delay would probably be fatal.”

The operation, which cost an equivalent of £3000 (about $430) in today’s currency, was carried out during October 1900 using chloroform. At the time, the postoperative pain from these types of operations was excruciating, and the wound required daily dressings, cavity packing and frequent administration of morphine, opiates and chloral. Wilde’s health improved enough for him to venture out on short walks, although he suffered from “unsteadiness of gait and giddiness (probably due to labyrinthine involvement of the middle ear),” state the authors. In November, Wilde suffered a relapse of the infection, became delirious and uncooperative, refused nourishment, then lapsed into a coma. He died on November 30, 1900. The article shows a photo of Wilde at his wake, during which a flower was carefully placed to conceal the surgical wound.

The authors cite two doctors’ assertion that “the diagnosis of meningoencephalitis must be made without doubt,” and that this condition was brought on by chronic suppurative otitis media. The authors believe that the operation carried out on Wilde was a radical mastoidectomy (a procedure developed in 1873) or a similar variety of the procedure.

Several dark ironies are also pointed out. The first is that Wilde’s father was Sir William Wilde, a pioneer of aural surgery during the 19th Century. Additionally, eight weeks after Oscar Wilde’s death, his younger son, Vyvyan, underwent what was probably a cortical mastoidectomy for acute mastoid infection. The authors also note that, shortly before his death, Wilde told visitors that he would never see the end of the “new century as the English would not stand for it.”

What you see is what you hear

In a fairly straightforward experiment, researchers presented visual flashes accompanied by 1-4 auditory beeps to eight study subjects. The results show that, when a single flash was accompanied by multiple beeps, the subjects incorrectly identified the visual stimulus as a multiple flash. The researchers consistently showed that this is the result of a perceptual illusion and “not due to the difficulty of the task, cognitive bias or other factors.”

The flashes were presented 50 milliseconds (ms) apart and were composed of a white disk presented on a black background. The beeps were presented 57 ms apart. The subjects’ performance was the same whether the disk was flashed twice with one or no beeps, or flashed once with multiple beeps. Moreover, the illusion persisted even when subjects were aware that the disk was flashed only once while several beeps were presented. There was no illusion effect when multiple flashes were accompanied by a single beep. While the illusion’s effect declined when the auditory signal was separated by 70 ms, the researchers found that the illusion still occurred to some degree as long as the beeps and the flash were within about 100 ms of each other. This time interval is within the “integration time of polysensory neurons in the brain,” observed the authors.

Other research has shown that perceived direction of ambiguous motion is influenced by sound. The results of this study extend this phenomenon to a dynamic where “visual perception can be quantitatively altered by sound even when the visual stimulus is not ambiguous.”

If you’ve ever lived in a thin-walled apartment next to noisy neighbors, pity the beluga whale. Science writer Paul Marks reports that new research may show that beluga whales may be suffering from man-made noise, and are perhaps even victims of noise-induced hearing loss.

Christine Erbe and her colleagues at the Institute of Ocean Studies in Sidney, British Columbia, have found evidence that ice-breaking activities in the Arctic may damage the whale’s hearing after 20-minutes exposure—and this can occur up to 4 kilometers (km) away. This is no wonder when one considers the amount of noise generated from these vessels and the conductivity of water. An ice-breaker’s “bubbler” (a device that uses compressed air to keep ice chunks away from the ship’s keel) has a sound pressure level of 192 dB, and the ship’s propeller screws produce cavitation noise levels of 197-205 dB. Erbe reports that the ships can interfere and mask beluga whale communications, inducing behavioral changes as far as 14 km from the ice-breakers.

Beluga populations have fallen in recent years. The article quotes a Canadian Coast Guard official who states that belugas, mammals that rely on air and open ice to breathe, are seldomly found in areas where ice-breakers are called to clear.

The data and software developed by Erbe et al. may find use in analyzing the long-range effects of other seagoing vessels and operations such as oil rigs and ocean dredges.

The joy of empty nesting

While there is a lot of talk about the burgeoning aged within the baby-boomer demographic, by far one of the most affluent consumer segments within this population are empty nesters, those parents whose children have left the home. Some 30 million of the 78 million baby-boomers are, or will soon become, empty nesters this year. Significantly, 84.5% of empty-nesters experience an increase in discretionary income once the kids leave, and more than a third experience an increase of over $10,000 in discretionary funds.

Perhaps the most striking fact that the article points out is how reluctant this group is to admitting anything about aging. “The common factor is these people aren’t getting older no matter what the calendar says,” states Josh Bickert, president and CEO of Looking Glass in Denver. His marketing advice is to never talk down to these people. He also says that trying to appeal to this group of consumers with the “sweet, saccharin older couple” approach is the kiss of death.

One of the most successful companies at capturing empty-nesters is Harley-Davidson, whose average customer is 44.6 years old (91% male) with a median household income of $73,800. Harley-Davidson’s approach emphasizes “the open road, the camaraderie, the individualism” represented by their product, says director of communications Paul James. It also doesn’t hurt that the company offers a huge array of accessories that appeal to both the “Terminator” and “Easy Rider” types. 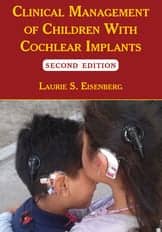 Book on Children with Cochlear Implants Released in 2nd Edition