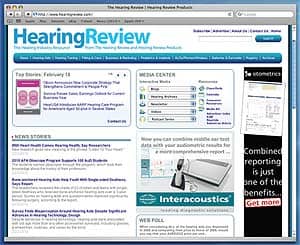 TOP NEWS and HEADLINES in February

• More links between cardiovascular and hearing health. New research published in a recent edition of the American Journal of Audiology (AJA), a journal published by the American Speech-Language-Hearing Association (ASHA), Rockville, Md, reports that cardiovascular health positively impacts hearing over time, particularly among older adults. Growing older can contribute to decreased hearing acuity; however, age is only one of many factors that contribute to the decline.

The study, conducted by Kathleen Hutchinson, Rachael Baiduc, and Helaine Alessio, reports evidence that cardiovascular fitness has a protective role in hearing loss prevention. Other health and fitness determinants, body composition, blood pressure, and blood lipids, displayed no significant relation to hearing sensitivity, whereas muscle strength was inversely related. A common explanation of how cardiovascular fitness may influence hearing is through the effect on blood circulation, especially to the organs and muscles on the inner ear, in particular, the stria vascularis in the cochlea. Metabolism and blood flow are directly related to the vascular pattern of the cochlea. The research findings appeared in the January 19 online edition of AJA.

• Separate brain pathways process the start and end of what we hear. A team of researchers from the University of Oregon, Eugene, Ore, say they have isolated an independent processing channel of synapses inside the brain’s auditory cortex that deals specifically with shutting off sound processing at appropriate times. Such regulation is vital for hearing and for understanding speech.

The discovery, detailed in the February 11 issue of the journal Neuron, goes against a long-held assumption that the signaling of a sound’s appearance and its subsequent disappearance are both handled by the same pathway. The new finding—which supports an emerging theory that a separate set of synapses is responsible—could lead to new, distinctly targeted therapies such as improved hearing devices, says Michael Wehr, a professor of psychology and member of the UO Institute of Neuroscience. “It looks like there is a whole separate channel that goes all the way from the ear up to the brain that is specialized to process sound offsets,” says Wehr. The two channels finally come together in the auditory cortex, which is situated in the temporal lobe.

To do the research, Wehr and two UO undergraduate students—lead author Ben Scholl, now a graduate student at the Oregon Health and Science University in Portland, and Xiang Gao—monitored the activity of neurons and their connecting synapses as rats were exposed to millisecond bursts of tones, looking at the responses to both the start and end of a sound. They tested varying lengths and frequencies of sounds in a series of experiments.

It became clear that one set of synapses responded “very strongly at the onset of sounds,” but a different set of synapses responded to the sudden disappearance of sounds. There was no overlap of the two responding sets, the researchers noted. The end of one sound did not affect the response to a new sound, thus reinforcing the idea of separate processing channels. The UO team also noted that responses to the end of a sound involved different frequency tuning, duration, and amplitude than those involved in processing the start of a sound—findings that agree with a trend cited in at least three other studies in the last decade.

“Being able to perceive when sound stops is very important for speech processing,” Wehr said. “One of the really hard problems in speech is finding the boundaries between the different parts of words. It is really not well understood how the brain does that.” As an example, he noted the difficulty some people have when they are at a noisy cocktail party and are trying to follow one conversation amid competing background noises. “We think that we’ve discovered brain mechanisms that are important in finding the necessary boundaries between words that help to allow for successful speech recognition and hearing,” he said.

The research, funded in part by the UO’s Robert and Beverly Lewis Center for Neuroimaging Fund, aims to provide a general understanding of how areas of the brain function. The new findings, Wehr said, could also prove useful in working with children who have deficits in speech and learning, as well as in the design of hearing aids and cochlear implants. He also noted that people with dyslexia have problems defining the boundaries of sounds in speech, and tapping these processing areas in therapy could boost reading skills.

An interesting video of Dr Wehr explaining this research can be found at the UO Web site at uonews.uoregon.edu.

“Tinnitus, or the perception of sound without an external acoustic stimulus, is a common but poorly understood symptom,” write Ellen Kvestad, MD, PhD, of the Norwegian Institute of Public Health, Oslo, and Akershus University Hospital, Akershus, Norway, and colleagues. “Although the list of factors associated with tinnitus is long, the causes of tinnitus onset and tinnitus maintenance are far from fully understood, and attempts to develop evidence-based therapies have been thwarted by a poor understanding of the pathophysiology of the condition.”

Tinnitus has recently been reported to cluster in families, but little is known about the importance of genetic effects in susceptibility to the condition. The researchers analyzed data collected from 12,940 spouses, 27,607 parents and offspring, and 11,498 siblings. All participants completed a questionnaire about tinnitus and underwent a hearing examination. A subgroup of 16,186 individuals with some hearing loss and 17,785 controls were sent a second questionnaire requesting more details about tinnitus, to which a total of 28,066 responded.

About 20.9% of the participants reported having definite or probable symptoms of tinnitus. On a scale of -1 to 1—where -1 would indicate that offspring always had tinnitus if their parents did not, and 1 would indicate that both parents and offspring always had tinnitus—correlations for tinnitus ranged from 0.01 to 0.07 for parents and offspring. The correlation between siblings ranged from 0.06 to 0.14, and the spouse correlation was 0.04.

Although the data did not distinguish between types of tinnitus—some of which may be more heritable than others—the low overall correlation does not indicate that any prevalent type of tinnitus is largely passed down through families, according to the study. “This result needs to be replicated with other measures of tinnitus and other types of family data,” the authors write.

“Our results do not necessarily mean that genetic effects are unimportant for all forms of tinnitus, because this symptom can arise from a wide variety of underlying diseases,” they conclude. “Considering the heterogeneous origin of tinnitus, rather than searching for the genes responsible for tinnitus in general, future investigators need to identify subgroups of individuals affected by tinnitus with specific causes. Our results do not support the spending of large amounts of time and resources to identify the genes that code for tinnitus in general.”

The study was funded by the National Institute on Deafness and Other Communication Disorders (NIDCD).

• Health care reform legislation continues. The Hearing Industries Association (HIA) and a coalition of hearing health groups continue to work in support of the Senate’s FDA Class I Device exclusion provision that would exempt hearing aids from a proposed tax on medical devices. The House bill exempts only items sold at retail from its 2.5% tax on medical devices, and that would effectively result in a tax on all hearing aids sold. Reps Carolyn McCarthy (D-NY), Shelley Berkley (D-Nev), and Dina Titus (D-Nev) have contacted the House Speaker Nancy Pelosi (D-Calif) directly in support of the Class I exemption, as have several senior hearing care champions from the Ways and Means Committee. Every Representative who has attended a local Hearing Loss Association of America or AG Bell event in their district that was sponsored by HIA and supported by the International Hearing Society (IHS) has been supportive of efforts to exempt hearing aids from the tax, according to HIA.

Also under consideration is a House provision that would mandate insurance coverage for hearing aids for children under 21 years old, although the form of coverage required is not specified in the legislation. The Senate bill does not include such a mandate. Congress is also working to reconcile Practitioner Payment Disclosure provisions that are included in both House and Senate health care bills. Both proposals would require disclosure of payments to physicians, and the House bill would expand the requirements to other medical groups. The medical device industry is focused on efforts to ensure that any federal “sunshine” regulations preempt state reporting programs to minimize paperwork and compliance-related burdens. 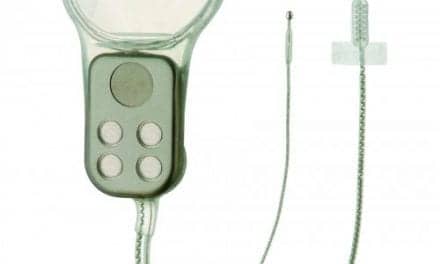 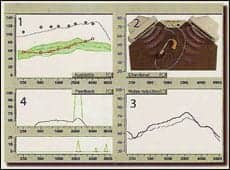