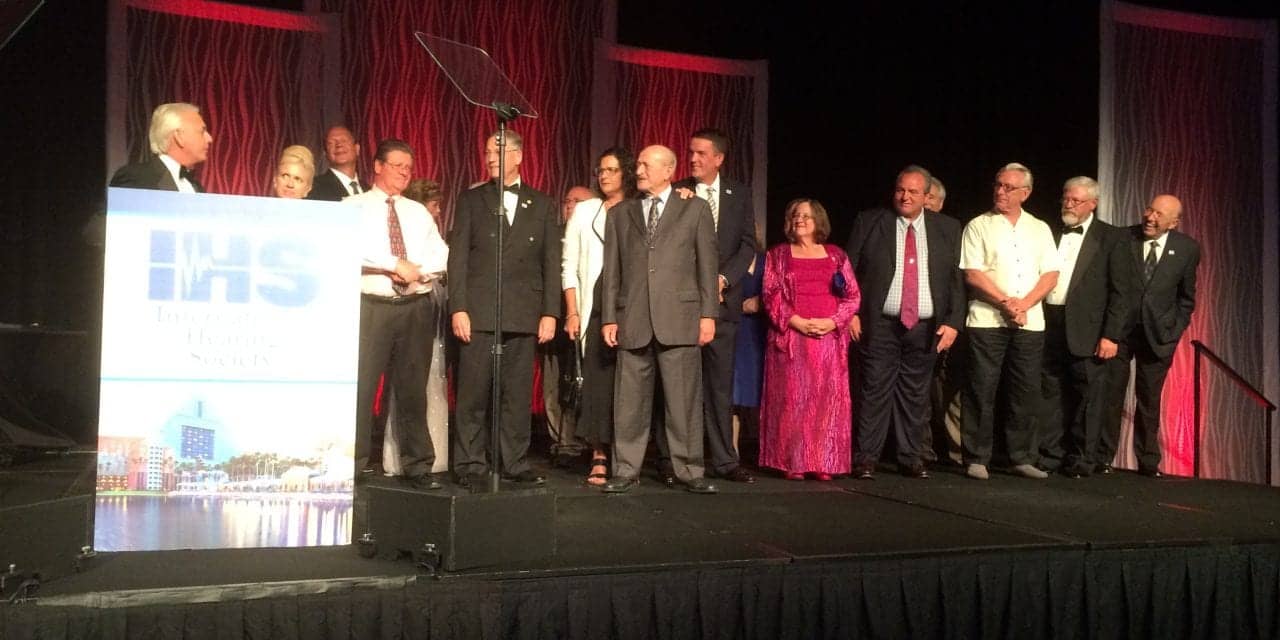 Approximately 850 hearing care professionals attended the International Hearing Society’s (IHS) 64th annual convention held at the Walt Disney World Dolphin hotel in Orlando on September 10-12 which had as its theme, “Soaring into Excellence Together.” The convention featured over a dozen general sessions and special seminars, as well as an expo hall displaying the products and services of more than 70 companies and organizations. Also held in conjunction with this year’s IHS Convention was the Florida Society of Hearing Healthcare Professionals (FSHHP) annual meeting, one of IHS’s largest chapters.

On Thursday night, the convention was kicked off with a dinner and inspirational presentation by sports author Ross Bernstein. In his keynote, “The Champions Code: Life Lessons of Ethics and Accountability from the Sports World to the Business World,” Bernstein enumerated and paralleled the vital attributes of success of both athletes and business entrepreneurs and leaders. 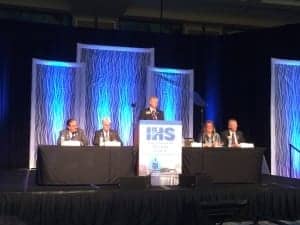 On Friday morning, IHS held its Membership meeting, hosted by IHS Executive Director Kathleen Menillo, MBA, and Society President Scott Beall, AuD, CCC-A, ACA, BC-HIS. This was followed by a general session luncheon that featured Curtis Alcock, a UK-based hearing aid dispenser who has written articles and presented a webinar for The Hearing Review, among other venues. As the luncheon’s sponsor, Oticon President Peer Lauritsen, pointed out, Alcock is quickly gaining an audience for his out-of-the-box thinking about how the hearing care industry might revise its approach when trying to convince consumers to address their hearing loss. 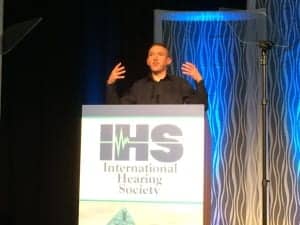 Curtis Alcock presented information on how to “Unlock the Secret Formula to Drive More Customers to Your Door.”

Friday afternoon featured five seminars ranging from the new Baby-Boomer consumers and Millennial influencers to the need for real-ear measurements when fitting and demonstrating the efficacy of hearing aids to consumers. The full day of learning concluded with a networking dinner held in the exposition hall that included a book signing by US Army 1st Sergeant (ret) Matt Eversmann. As the author of the book The Battle of Mogadishu—the battle made famous by the movie Black Hawk Down—Eversmann is also the national spokesperson for IHS’s Fit to Serve initiative.

On Saturday, the program schedule began with a breakfast in the exposition hall, followed by a seminar on power hearing aids and power sources by long-time industry engineer Steve Armstrong, and a seminar about the new MarkeTrak 9 research data by Hearing Industries Assn (HIA) Executive Director Carole Rogin.

A Saturday luncheon sponsored by Phonak featured Howard Wasdin, a former member of SEAL Team Six and the co-author of the book, SEAL Team Six: Memoirs of an Elite Navy Seal Sniper. Wasdin provided a behind-the-scenes account of his experiences as a member of this elite military force. Following Wasdin’s speech, a seminar entitled “Ethical Business Practices in the Prevention/Mitigation of Medical Errors” was offered by Douglas Lewis, JD, PhD, AuD, MBA, as well as a seminar by Lori Bunkholt about speech-in-noise testing. 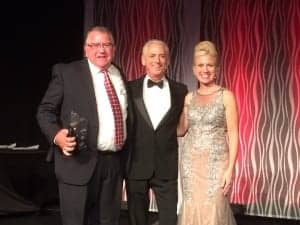 At the IHS Gala Dinner, Wayne Morris of the Oklahoma Hearing Assn was presented with the Society’s James P. Lovell Award by Alan Lowell and Leanne Polhill.

The convention concluded with the annual IHS Awards Gala hosted this year by hearing aid specialists and educators Alan Lowell, a former president of IHS, and Leann Polhill. The Society’s James P. Lovell Award, which is awarded annually in recognition of ongoing efforts for advancing the status and role of hearing aid specialists, was presented to Wayne Morris of the Oklahoma Hearing Association. Morris was instrumental in getting the state of Oklahoma to reconsider an overhaul of the current International Licensing Exam (ILE) and developing its own exams, possibly setting a precedent for other states to do the same. The IHS Chapter of the Year Award was presented to the Washington Hearing Society which has revamped its organization and increased membership by 35%. The Hearing Review’s Professional Leadership Award was presented to Todd Beyer, ACA, BC-HIS, is a second-generation hearing aid specialist and president of the Wisconsin Alliance of Hearing Professionals. 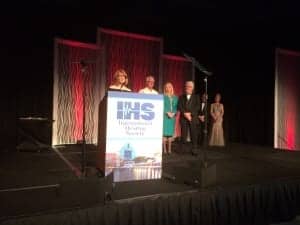 The IHS Chapter of the Year Award was presented to the Washington Hearing Society represented by (l to r) Dianne Fox, Tammy Miller, Rick Giles, and Ralph Lenhard.

The IHS Convention, and the Society in general, has experienced something of a renaissance during the past several years, with increased attendance at its convention and higher membership numbers. The Society reported a membership increase of 12% in 2014 despite what the organization characterized as an “aggressive database clean up” following an upgrade to its membership database. This year’s IHS expo was well attended, and the vast majority of exhibitors expressed satisfaction with the number of IHS members who visited their booths.

Next Year: Unison. Next year’s convention is scheduled to be the first-ever joint convention between IHS and the Academy of Doctors of Audiology (ADA). The Unison Hearing Health Global Summit (Unison)—designed to be an innovative forum and educational experience that will bring together audiologists, hearing aid specialists, physicians and other providers, as well as industry and consumer representatives—will be held September 8-11, 2016 at the Hyatt Regency Chicago. 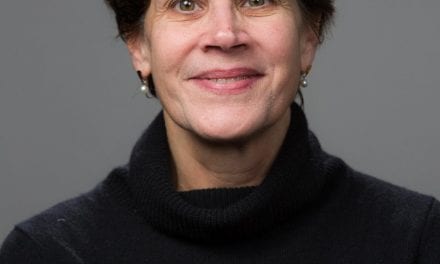