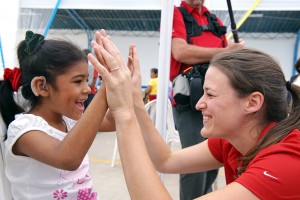 A Young Peruvian Girl Receives the Gift of Hearing

Members and employees of Audigy Group, a Vancouver, Washington-based management company, traveled to Peru this summer to help supply free hearing aids in support of the Starkey Hearing Foundation’s mission to provide the gift of better hearing to people around the world.

Two missions to Peru occurred hot on the heels of the Starkey Hearing Foundation’s July 2014 “So the World May Hear” Awards Gala — an event that raised nearly $9M for charity, and featured guests and honorees such as former Secretary of State Hillary Clinton, Forest Whitaker, Archbishop Desmond Tutu, John Legend, and Derrick Coleman. The missions took place in the cities of Iquitos and Cusco, and focused on fitting nearly 5,000 people in need with hearing aids.

“I’m incredibly honored to have sponsored another Starkey Hearing Foundation mission,” said Brandon Dawson, founder and CEO of Audigy Group. “So many people on our team and in our membership are passionate about giving back — several have cited participating in these missions as personal goals, and one of my personal missions is to help those I work with to achieve their goals. It’s a dream come true to be able to offer that level of support to them, to the Starkey Hearing Foundation, and, of course, to those in need of better hearing. These folks set an example for us all to follow.”

The missions, which took place August 16 through September 6, 2014, were reflective of the Starkey Hearing Foundation’s worldwide missions filmed for “Operation Change,” a reality series featured on Oprah Winfrey’s OWN Network. The series follows Bill and Tani Austin and their son, Steven Sawalich, from Starkey Hearing Foundation, a global nonprofit organization that gives free hearing aids to those in need.

The series features philanthropists joining forces, including former President Bill Clinton, Sir Richard Branson, Sir Elton John, and many others as they travel to some of the most dangerous and poverty-stricken places in the world.