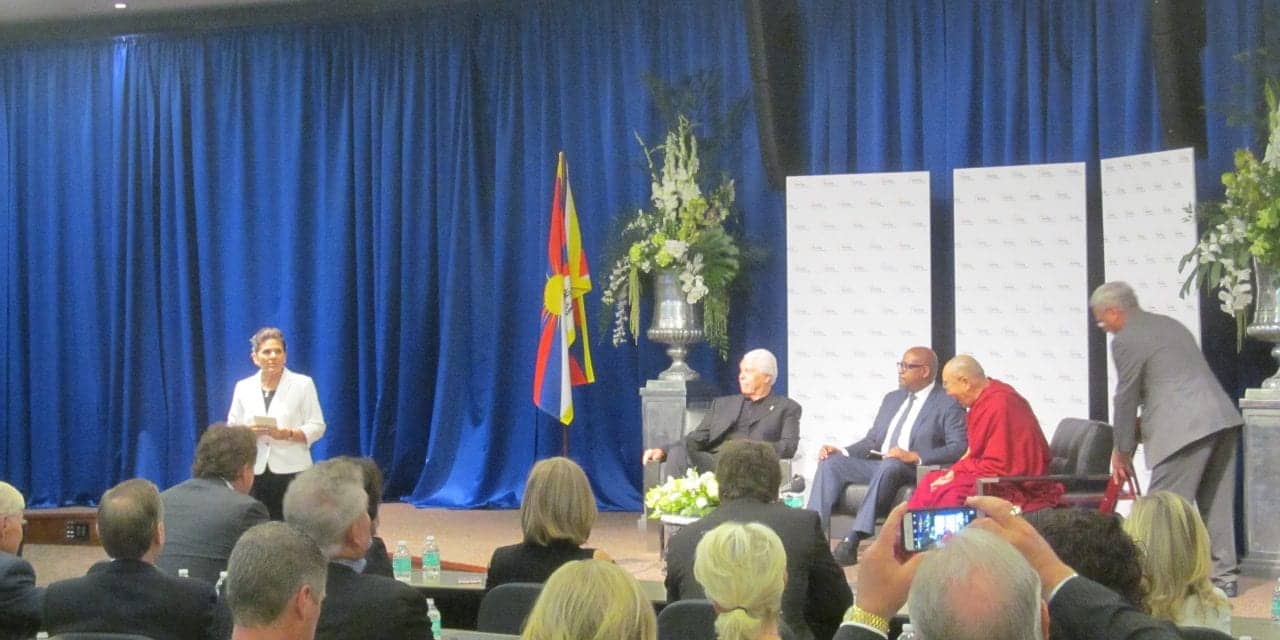 About 250 hearing care professionals, Twin Cities-area business people, and area politicians attended a panel discussion featuring the Dalai Lama, moderated by actor and UNESCO envoy Forest Whitaker, along with comments from Starkey Hearing Technologies Founder and CEO William (Bill) Austin, Chief Philanthropic Officer Tani Austin, and Executive Vice-president Brandon Sawalich. The panel was held at Starkey headquarters in Eden Prairie, Minn, on Friday, June 23, and the 81-year-old spiritual leader delighted the audience with his frank and sometimes surprising answers, while Whitaker and Bill Austin chimed in with their own unique perspectives. 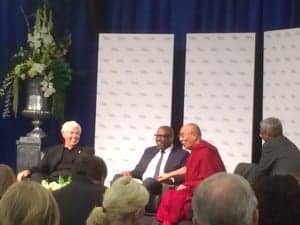 The three men discussed a range of topics, including compassion, giving, leadership, and finished by fielding questions from attendees. The soft-spoken and reflective Whitaker was the perfect moderator and complemented the demeanor of the Dalai Lama, who while struggling with his English often reached over to touch Whitaker’s hand when answering questions or emphasizing a point.

The Dalai Lama said that compassion can be defined as “a genuine concern for others, including birds, insects.” Then pausing, and perhaps acknowledging the conflicts this might pose for a Minnesota audience, he quickly countered, “Occasionally I find it difficult to keep compassion toward mosquitoes” when trying to sleep, and he used a swatting motion to demonstrate the point.

Continuing, he said that compassion finds its roots in the sincere concern for others’ well being. “By having compassion, your whole life can carry honesty, truthfulness; that brings inner strength. Nothing to hide. Profound strength,” he said. “We are social animals. Friendship is very important. In order to develop genuine friendship, trust is the key factor. In order to develop trust, firstly you show them your sincere concern with their well being. Then trust comes…Because with compassion develops the seeds of self-confidence…So, in order to function our intellects properly, the inner mind must be calm.” He said that anger disturbs the mind, clouding reason and making it impossible to see a more full picture of reality.

The Dalai Lama later made a case that formal education should include what he called emotional hygiene. “My friend, psychiatrist and cognitive therapist, Aaron Beck, who has worked with people troubled by anger, told me that when we’re angry we see the person we’re angry with in a totally negative light,” he said. “However, 90% of anger is just mental projection. On the other hand, compassion, as I’ve said, enables us to see things in an unbiased and realistic way.” 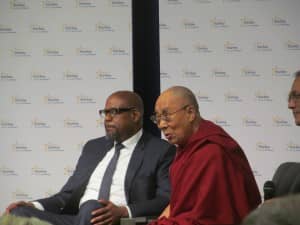 Moderator Forest Whitaker and the Dalai Lama address questions from the audience.

“If you truly respect life,” said Bill Austin, “you will live your life and try to uplift it—which means caring can be interpreted as love in action…[As people are cared about], they’re nourished, and spiritually they gain hope. The greatest thing that we do is not bringing hearing to the ears; we bring hearing to the heart. We allow people to listen with their hearts, so they might understand each other—because they’ve been cared about. So I think compassion involves and [begins with] respect for all life. Every person is important. We’re one human family. We’re one community. We rise together as we help each other, and anyone who is diminished [for] unnecessary reasons, diminishes all of us…So we have to do what we can when we can.”

When Whitaker brought up the topic of giving, the Dalai Lama said that giving can be thought of in  four ways. He says there is giving of fearlessness and saving people from a life of fear; giving material gifts; giving love and sincere motivation and compassion; and the giving of dharma—or instruction and education. He believes the work the Starkey Hearing Foundation does to help people hear better could also be considered the giving of freedom from fear and helping defend the lives of others.

The Dalai Lama said leadership ultimately comes through the trust of followers. Leadership relies on compassion, long-term vision, and a holistic viewpoint for improving life or a situation. Reality is relative, he says, and because everything is interconnected, true leadership requires a person who can assemble a larger and more accurate picture of reality and look at it from various angles.

During a lively question-and-answer session, he lauded democracy in both India and the United States. He believes India is an exceptional example of how a large number of different religions and cultures can co-exist and support each other. Similarly, he said that although the United States may be the most powerful military power in the world, what impresses him and others most are its fundamental commitments to democracy, freedom, and equality.

Toward the end of the discussion, an audience member asked him what advice he might offer for reducing the heated rhetoric and negativity in Washington, DC. After considering the question for a moment, he said, “I don’t know,” prompting a peal of laughter from attendees. He explained that he would need to spend three or more months in the capitol studying the situation in order to offer any possible suggestions. 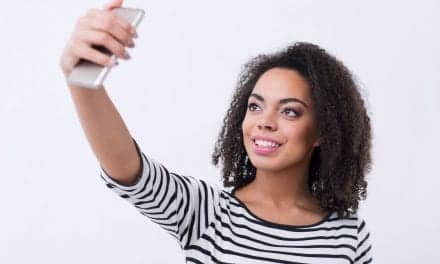