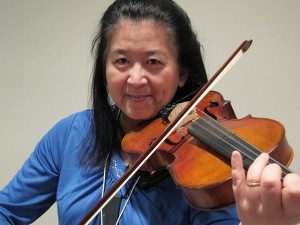 Cheng, who uses bilateral cochlear implants for her own hearing loss, explained that AAMHL was established to help overcome the prevailing attitude in the hearing healthcare industry that making or performing music is not a worthwhile endeavor for people with hearing loss, especially if they are adults. “In my own experience as a person with hearing loss, I kept hearing that speech was essential to survival but music was not,” Cheng says. “Yet, for people like me, music making is second nature and we can’t imagine a life without aural music.”

An avid violin player for many years, Cheng was cautioned by her cochlear implant audiologist that after activation of her CI device, she shouldn’t expect to hear her violin quite as well as she would hear spoken language. This was discouraging news for Cheng, who decided to switch from violin to viola when she realized that hearing and discriminating notes two octaves above middle C was impossible with her implant.

“Much later, while sitting at an HLAA workshop in 2001 on how to teach music to hearing impaired children, it occurred to me that I might be able to help bring more awareness to the issues that D/deaf and hard of hearing adults have when playing music with significant hearing loss,” says Cheng. “That’s when I started plans to establish the Association.”

The AAMHL’s membership is comprised primarily of amateur musicians and adult music students, and includes a smaller number of audiologists and music professionals, as well as music educators. In the organization’s early days, members performed in libraries and nursing homes. They have since put on two performances in New York City, one in 2010, and one in 2014. AAMHL members also have performed in a church in New Jersey. In May 2015, the group will give its first performance for the public in Washington, DC.

In addition to putting on musical performances, the Association is involved in a range of activities aimed at raising awareness, and has started holding meetings with other groups to help spread the word. In 2014, the Association started organizing regional meet-ups for members, with an initial meeting held at a retreat center near Richmond, Virginia. Members have participated in discussion panels at various events, and have partnered with AudiologyOnline to produce webinars focused on music and hearing loss.

As mentioned in a Hearing Review event post this month, the Association recently announced its inaugural 2015 Conference, which is scheduled for May 29-30, 2015 in Washington, DC. The 2-day conference is slated to offer participants opportunities to hear the stories of musicians with hearing loss, and learn how to listen to music and sing with a hearing loss. The conference, which will feature several speakers of note, will offer real-time captioning and a loop system.

For more information about the 2015 Conference, please visit the AAMHL conference website.