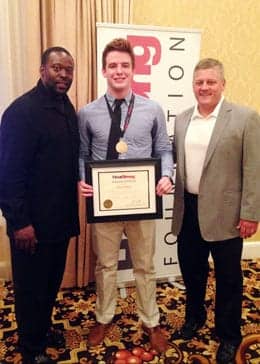 The HearStrong Foundation announced that during a special ceremony in New Orleans on October 25, 2015, it recognized student Matt Adams for helping to change the face of hearing loss in his community and beyond.

The foundation reports that two-time Louisiana State wrestling champion Matt Adams is a HearStrong Champion as well. The New Orleans chapter of the NFL Players Association were amongst the hearing healthcare professionals and others who gathered at a special event at the Roosevelt New Orleans Waldorf Astoria Hotel.

Originally from Lafitte, La, Matt was diagnosed with hearing loss as an infant and began using hearing devices as a toddler. Through this early intervention, Matt adapted quickly and thrived personally and academically. “With school and sports in mind, my hearing aids have allowed me to excel in areas that I would not be able to without hearing well,” said Matt.

Currently a freshman at Louisiana State University (LSU), Matt competed in wrestling and football in high school. In 2014 and 2015, he won the Louisiana High School Athletic Association Wrestling Championship in his division and weight class.??

“With his determination and passion for helping others understand the value of hearing better, Matt embodies the spirit of a HearStrong Champion,” said Ed Keller, founder and president of the HearStrong Foundation.

The HearStrong Foundation is a 501(c)(3) not-for-profit organization that seeks to shatter the stereotypes surrounding hearing loss by honoring the accomplishments of those who have overcome it and inspire others to do the same. Supported by EarQ providers, the foundation is a worldwide advocate for hearing loss awareness, education, and support.

Oticon “At the Heart of It” Raises 10,000 for American Heart Association