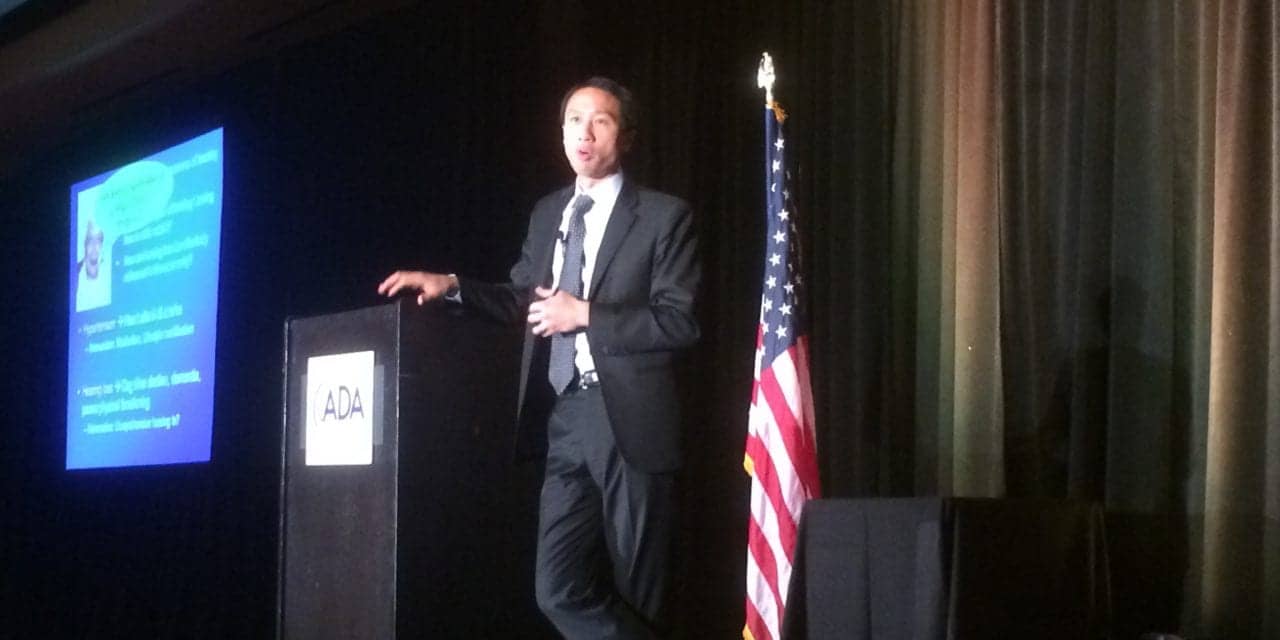 During the keynote presentation of the 2014 Academy of Doctors of Audiology (ADA) Convention held last week in Las Vegas, Frank Lin, MD, PhD, of Johns Hopkins University School of Medicine and Bloomberg School of Public Health in Baltimore, provided an engrossing and wide-ranging discussion about the consequences of age-related hearing loss (ARHL) and how it might be addressed at the community level. Dr Lin, one of the most widely respected researchers in the area of hearing loss and cognition, presented a 1-hour keynote, “Hearing Loss and Aging: Consequences, Implications, and Creating Better Outcomes Through Alternate Models of Care,” that touched on many of today’s hottest topics in hearing healthcare, including the relationship between hearing, cognition, and general health, as well as the dynamic hearing aid distribution system.

Consequences of ARHL. Lin detailed three mechanistic processes related to ARHL that are hypothesized to lead to poorer health status in seniors, including: 1) the idea that cognitive resource capacity diminishes with age (ie, Kahneman Model of Divided Attention); 2) physical changes in the body, such as microvascular diseases, dementia, and hearing loss which may be inter-related, and 3) the contribution of hearing loss to lack of social engagement in older adults which can bring on a raft of other physical problems related to poor health status.

According to Dr Lin, current projections estimate the prevalence of dementia will continue to double every 20 years, such that 1 in every 30 Americans will have dementia by 2050. He showed that, in two independent studies using cross-sectional data from the National Health and Nutritional Examination Surveys (NHANES) and the Baltimore Longitudinal Study of Aging (BLSA), researchers have demonstrated that hearing loss is associated with poorer cognitive functioning on non-verbal tests of memory and executive function among older adults. In both studies, a 25 dB shift in the speech-frequency pure-tone average was equivalent to nearly 7 years of aging on cognitive scores in older adults (see Dr Lin’s article, Hearing Loss and Dementia, in the September 2012 edition of The Hearing Review). In another study, using a rigid definition of dementia, subjects had 2, 3, and 5 times increased risk for dementia depending on if they had mild, moderate, or severe hearing loss, respectively.

So what? Lin pointed out, however, that speaking strictly from a clinician or surgeon’s viewpoint, “I don’t care. My question is ‘Can I treat it?’”

According to Lin, that’s where the issue becomes difficult to address. There is no evidence that treating hearing loss—let alone using hearing aids—can “make one lick of difference” in fending off cognitive decline, says Lin. Likewise, there are no studies indicating that treated hearing loss can reduce the incidence of or forestall dementia.  And, although he confided that there may be as many as 20% of subjects who appear to fair better in the studies if they are using hearing aids, there are no available data that makes it possible to claim that untreated hearing loss can lead to cognitive decline or dementia.

The good news is that Dr Lin and colleagues are hoping to answer the “Can I treat it” question with a study that will follow subjects for over 5 years, looking for possible correlates for ARHL, treated hearing loss, and dementia. The bad news is that the earliest we can expect completion of this study is 2021.

Barriers to treatment of hearing loss. Currently, the United States has 26.7 million people ages 50+ with significant hearing loss, but only 3.8 million (14.2%) people in this population wear hearing aids, says Lin. In his view, four fundamental issues underlie this low-use figure:

He said that cost and access issues often prompt physicians and clinicians to not recommend or even mention the possibility of amplification options to seniors.

Alternate models of care. However, given the above, Dr Lin believes several positive trends are emerging that will improve treatments for hearing loss. As noted earlier, a broader understanding of ARHL and its consequences for healthy aging and the public’s general health will doubtlessly provide older adults with greater incentives to have their hearing checked and to obtain hearing help. Additionally, events like the January 2014 IOM-NRC-sponsored “Hearing Loss and Healthy Aging” Workshop provide a top-down formal governmental response to affordability and accessibility of hearing aids, which has the potential of affecting change much faster than the typical bottom-up (ie, clinician to government) route.

The air became a bit chillier as Dr Lin detailed the use of personal sound amplification products (PSAPs)—which, by FDA definition, are devices not intended for hearing loss—as good low-cost solutions for the hearing-impaired population. His group is researching the use of a self-programmable PSAP (the SoundWorld Solutions CS-50 which Hearing Review reported on in April) using community healthcare workers (CHW) for screening, education, and device orientation. Lin proposed a range of possible dispensing solutions, from least expensive/effective to most expensive/effective that included PSAPs without any supervision, PSAPs provided by CHWs, hearing aids dispensed by hearing instrument specialists, and hearing aids dispensed by audiologists (which he referred to as the “gold standard”).

Lin points out that the technology of hearing aids will also continue to improve, particularly in far-field performance. Current directional microphone technology has the potential for significant improvement of the signal, but can only deliver a signal-to-noise ratio (SNR) improvement of about 1 to 4 dB. When manufacturers develop an open wireless standard, as is currently being undertaken by the European Hearing Instrument Manufacturer’s Association (EHIMA), things will improve significantly. These open wireless devices will offer seamless use for consumers and be capable of delivering audio from a mobile device or media gateway with Bluetooth wireless technology and/or Wi-Fi Direct, with up to 16dB SNR improvement (comparable to today’s FM systems).

Hearing aids also need to be covered by Medicare, says Lin. In the November 5 edition of JAMA, Heather Whitson, MD, and Lin published a Viewpoint article about the need to update Medicare policy to improve coverage for hearing and vision rehabilitative services for older adults. He says that this will require the unbundling of hearing healthcare and convergence for audiological services.

In a question and answer session, there was no question about the amount of respect that Dr Lin commands from the audiology field or the importance ascribed to his work. However, private practice audiologist Kadyn Williams, AuD, contended that physicians should not make hearing healthcare recommendations (or a lack thereof) for patients based on what they think patients can afford, any more than they should omit mentioning a surgical procedure a patient might benefit from due to a lack of insurance coverage or ability to pay. Lin appeared to agree with Williams’ comment, at least in principle, although he said there are many specialties that involve home visits (eg, geriatric care managers), allowing these healthcare workers to gain an in-depth understanding of a patients’ complete living situation, including their finances.