The largest study ever to analyze the hearing of women on hormone-replacement therapy (HRT) has found that women who take the most common form of HRT have a hearing loss of 10% to 30% more compared to similar women who have not had the therapy. The results are published in the Proceedings of the National Academy of Sciences.

It’s as if the usual age-related hearing loss in women whose HRT included progestin, a synthetic form of the hormone progesterone, was accelerated compared to women taking estrogen alone or women not taking HRT. On average, women who received progestin had the hearing of women 5 to 10 years older.
The results of the study involving 124 women confirm results from a smaller study that the same group reported in 2004 at the annual meeting of the Association for Research in Otolaryngology. The new results also identify progestin as the component of HRT doing possible damage.

“Whether a woman goes on HRT is certainly her decision, and she should discuss the options with her doctor,” says senior author Robert D. Frisina, PhD. “In light of these findings, we feel that hearing loss should be added to the list of negative things to keep in mind when talking about HRT. Women especially who already have a hearing problem should weigh this decision carefully. Women on HRT should consider having a thorough hearing check-up done every 6 months.”

Frisina is part of one of the world’s leading groups in hearing research, the International Center for Hearing and Speech Research (ICHSR), which includes scientists from the University of Rochester Medical Center and the National Technical Institute for the Deaf at Rochester Institute of Technology. The National Institutes of Health funded the center.

In the study published in PNAS, a team of scientists, nurses, and audiologists compared the hearing of healthy women ages 60 to 86 who were divided into three groups. Thirty women had taken a form of HRT that included only estrogen; 32 women had taken both estrogen and progestin; and 62 women had never been on HRT. Each group contained women whose health histories and other characteristics closely matched those of the women in the other groups.

Each of the women was tested with a battery of hearing tests. A standard “pure tone” test was used to measure which frequencies each woman could hear. In addition, the team did two sophisticated tests in which a sound was sent into each woman’s ear, and then the echo coming back was measured. These tests tell scientists how healthy a person’s inner ear is. Finally, each woman underwent a “hearing in noise” test that measures how well the brain sorts out the multitude of signals traveling from the ear to the brain.

By all measures, women whose HRT included progestin had worse hearing than the other groups. The tests showed that women who had received progestin had problems with both the inner ear and in the portions of the brain used for hearing.

The results also show no benefit to hearing for women who take a form of HRT that includes estrogen alone, a surprise to researchers who thought that estrogen might help hearing.

The group is continuing its studies, trying to figure out the exact effects of progestin on the ears and brain. Those effects are likely felt to some degree by all women, since progesterone is a natural hormone that enables a woman to carry a pregnancy. Other scientists have found that a woman’s hearing can worsen slightly when her progesterone levels are high, during the latter portion of the monthly cycle.

The team also plans to study women who have gone off HRT to see if the hearing loss might be reversible. They also say that women on the birth control pill, which includes progesterone, should also be studied. 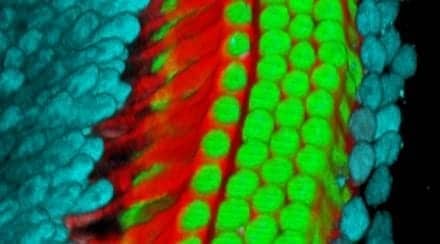