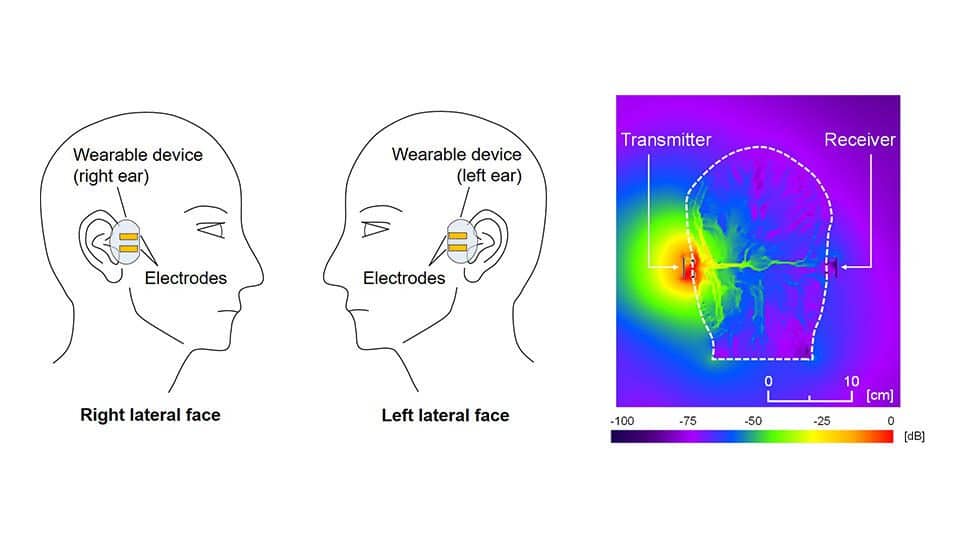 Wearable technology seems poised to take over next-generation electronics, yet most wireless communication techniques are not up to the task. To tackle this issue, scientists from the Tokyo University of Science, Japan, delved deep into human-body communications, in which human tissue is used as the transmission medium for electromagnetic signals. Their findings pave the way to more efficient and safer head-worn devices, such as binaural hearing aids and earphones. An article describing the research appears on the University’s website.

Modern portable devices are the result of great progress in miniaturization and wireless communications. Now that these devices can be made even smaller and lighter without loss of functionality, it’s likely that a great part of next-generation electronics will revolve around wearable technology. However, for wearables to truly transcend portables, we will need to rethink the way in which devices communicate with each other as “wireless body area networks” (or WBANs). The usual approach of using an antenna to radiate signals into the surrounding area while hoping to reach a receiver won’t cut it for wearables. But, this method of transmission not only demands a lot of energy but can also be unsafe from a cybersecurity standpoint. Moreover, the human body itself also constitutes a large obstacle because it absorbs electromagnetic radiation and blocks signals.

But what alternatives do we have for wearable technology? One promising approach is “human body communication” (HBC), which involves using the body itself as a medium to transmit signals. The main idea is that some electric fields can propagate inside the body very efficiently without leaking to the surrounding area. By interfacing skin-worn devices with electrodes, we can enable them to communicate with each other using relatively lower frequencies than those used in conventional wireless protocols like Bluetooth. However, even research on HBC began over two decades, this technology hasn’t been put to use on a large scale.

To explore the full potential of HBC, researchers from Japan, including Dr Dairoku Muramatsu from Tokyo University of Science and Professor Ken Sasaki from The University of Tokyo focused on using HBC for a yet unexplored use: binaural hearing aids. Such hearing aid devices come in pairs—one for each ear—and greatly improve intelligibility and sound localization for the wearer by communicating with each other to adapt to the sound field. Because these hearing aids are in direct contact with the skin, they made for a perfect candidate application for HBC. In a recent study, which was published in the journal Electronics, the researchers investigated, through detailed numerical simulations, how electric fields emitted from an electrode in one ear distribute themselves in the human head and reach a receiving electrode on the opposite ear, and whether it could be leveraged in a digital communication system. In fact, the researchers had previously conducted an experimental study on HBC with real human subjects, the results of which were are also published in Electronics.

Using human-body models of different degrees of complexity, the researchers first determined the best representation to ensure accurate results in their simulations and then once this was settled, they proceeded to explore the effects of various system parameters and characteristics, as Muramatsu puts it, “We calculated the input impedance characteristics of the transceiver electrodes, the transmission characteristics between transceivers, and the electric field distributions in and around the head. In this way, we clarified the transmission mechanisms of the proposed HBC system.”

Finally, with these results, they determined the best electrode structure out of the ones they tested. They also calculated the levels of electromagnetic exposure caused by their system and found that it would be completely safe for humans, according to modern safety standards.

Overall, this study showcases the potential of HBC and extends the applicability of this promising technology. After all, hearing aids are but one of all modern head-worn wireless devices. For example, HBC could be implemented in wireless earphones to enable them to communicate with each other using far less power. Moreover, because the radio waves used in HBC attenuate quickly outside of the body, HBC-based devices on separate people could operate at similar frequencies in the same space without causing noise or interference.

“With our results, we have made great progress towards reliable, low-power communication systems that are not limited to hearing aids but also applicable to other head-mounted wearable devices. Not just this, accessories such as earrings and piercings could also be used to create new communication systems,” said Muramatsu.