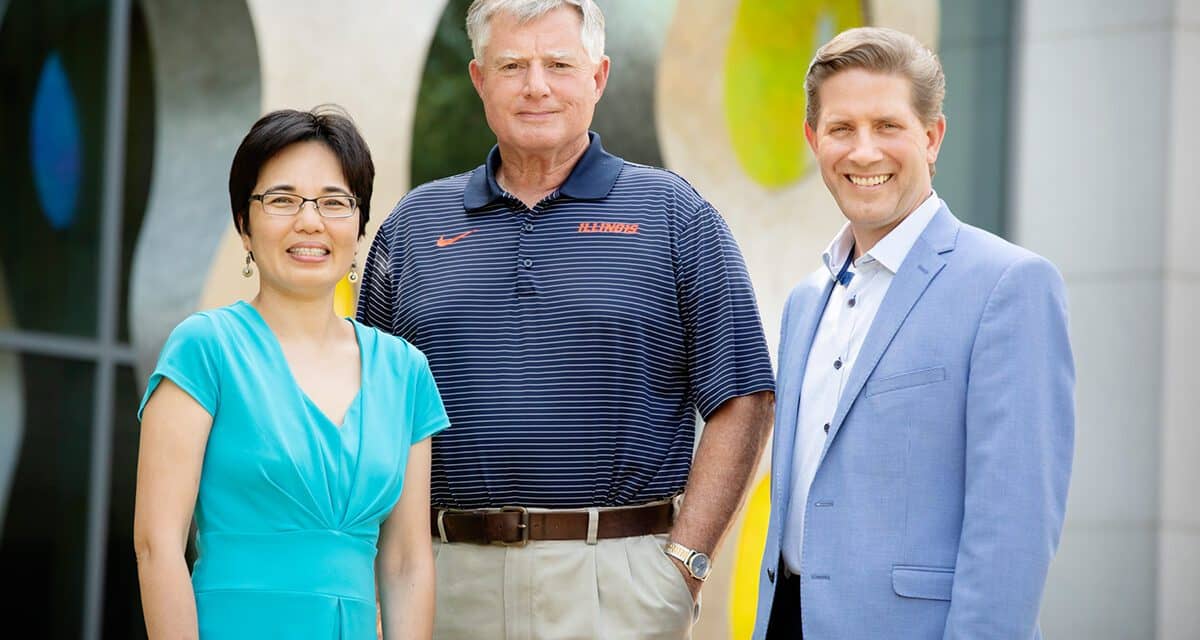 With their colleagues, U of I researchers, from left, Thanh H. (Helen) Nguyen, J. Gary Eden, and Stephen Boppart found that microplasma can disrupt bacterial species in a middle-ear model. Photo by L. Brian Stauffer.

Middle-ear infections are a common affliction in early life, affecting more than 80% of children in the US. Antibiotics are often employed as a first line of defense but sometimes fail against the pathogenic bacteria that can develop in the middle ear, just behind the eardrum. In a new study, researchers explore the use of microplasma – a highly focused stream of chemically excited ions and molecules – as a noninvasive method for attacking the bacterial biofilms that resist antibiotic treatment in the middle ear. An article describing the research appears on the University of Illinois at Urbana-Champaign website.

They report their findings in the journal npj Biofilms and Microbiomes.

Biofilms are communities of microbes that form on surfaces and reproduce, communicate with one another, and secrete a slimy adhesive matrix that holds them together. They can be tenacious and harmful, especially when associated with infection.

“Many studies have found that the highly reactive particles or molecules within this plasma can interact with and inactivate bacteria,” said Won, now a postdoctoral researcher at Massachusetts Institute of Technology (MIT). She shares first-author status on the new report with former U of I postdoctoral researcher Peter P. Sun, a process TD engineer at Intel Corporation.

Previous studies have found that the microplasmas can disrupt the bacterial biofilms that form on various surfaces.

“Before we tried this with ear infections, we found that the microplasma technique worked with drinking-water biofilms,” Nguyen said.

Other studies suggest that treatment with microplasma can promote wound healing and infection control, but no previous research has used the technique against middle-ear infections, Nguyen said.

To study this, the team developed a 3D-printed device that could generate and deliver microplasma via a carrier gas emitted through an array of tiny jets. They first tested the device on a bacterial culture of Pseudomonas aeruginosa, a common bacterial culprit in middle-ear infections. They also tried it out on an eardrum-mimicking artificial membrane that they impregnated with a biofilm of P. aeruginosa. Those tests revealed that the microplasma disrupted bacterial growth and viability.

They next tested microplasma on a model that simulated an infected, enclosed middle-ear cavity. For these experiments, they delivered the microplasma to the outside of the simulated eardrum, just as they would if they were treating a middle-ear infection in a human.

Researchers suggest that microplasma can be delivered to the human eardrum with a device that attaches to an otoscope speculum, a standard diagnostic tool for problems in the ear. Image courtesy Peter P. Sun, Jungeun (Jenny) Won, Thanh H. (Helen) Nguyen, J. Gary Eden, and Stephen Boppart. Illustration generated with help from the Beckman Institute for Advanced Science and Technology’s Visualization Laboratory. npj Biofilms and Microbiomes, 7(48), 1 (2021).

“That’s really important because that’s how it will be used in practice,” Won said. “And we found that those ions from the microplasma can penetrate to the eardrum and, depending on the length of treatment, deactivate those bacterial species and biofilms.”

The researchers also found that microplasma enhanced the potency and effectiveness of the antibiotic treatment against P. aeruginosa biofilms.

The team proposed that a microplasma-delivery device be integrated into an otoscope speculum, a standard diagnostic tool for problems in the ear. And because the most effective course of treatment took about 15 minutes, the researchers are exploring whether microplasma can be delivered via earbuds that can remain in the ear for extended periods of time.

“Many more studies must be conducted before we can explore the use of this technology in the human ear,” Won said. “But early indications are that this approach could be a viable alternative to surgery in cases where antibiotics alone are not effective.”

The National Science Foundation (NSF), US Air Force Office of Scientific Research, and the National Institutes of Health (NIH) supported this research.

Source: University of Illinois at Urbana-Champaign, npj Biofilms and Microbiomes