Researchers at the University of Alberta in Canada say that screening newborn babies who are in the neonatal intensive care unit (NICU) using a testing process called high-frequency tympanometry can help identify middle ear problems earlier.

As described in their article published in the June 23, 2015 issue of the Canadian Journal of Speech-Language Pathology, the research audiologists tested middle ear function in 31 infants between the ages of one week and six months at two hospitals to determine if there was hearing loss in the middle ear, and to rule out hearing loss in the inner ear or hearing nerve. 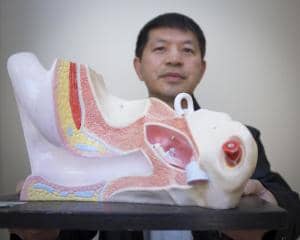 “Once we know the problem is with the middle ear, we can reduce stress on parents worrying about hearing loss and putting their child through a battery of followup tests, which can take months to complete,” Ming Zhang, MD, PhD, associate professor in the University of Alberta’s Department of Communication Sciences and Disorders. “This also allows us to concentrate treatment on middle ear disease that much sooner.”

According to Dr Zhang, middle ear impairments can be treated by various means, such as inserting a tube through the eardrum to relieve pressure issues or removing blockages of air flow into the middle ear behind the nose. These kinds of treatments for middle ear problems can return hearing to its optimal levels. Inner ear problems, which can result from damage to sensory hair cells in the cochlea that impairs the ability to convert sound vibrations into nerve activity, are much more complex, Dr Zhang says, and require more extensive treatments such as cochlear implants or hearing aids.

In their study of newborns, the research team showed that high-frequency tympanometry is a good test for identifying middle ear disorders in very young infants who are in or have recently been in the NICU. Use of this test could lead to earlier treatments and better hearing for these babies.

“Newborn screening is a priority of Canadian and American audiology and pediatric medical communities, and our study shows there is a benefit to screening the middle ear of newborns,” Dr Zhang said. The study was awarded the Excellence in Applied Research Award by Speech-Language & Audiology Canada, which partially funded the research.