NEW YORK (Reuters Health) – Clinicians have identified several risk factors that are strongly associated with an increased risk for the development or worsening of somnolence, edema and hallucinations at the time that patients with early Parkinson’s disease initiate treatment with levodopa or pramipexole.

Among a cohort of 301 patients with early Parkinson’s disease without hallucinations at baseline, 17% developed hallucinations, 35% developed somnolence, and 45% developed edema during the 4 years that they were followed as part of the CALM-PD trial.

Initiating treatment with pramipexole was the strongest predictor of somnolence and edema, with hazard ratios of 2.22 and 3.18, respectively, Dr. Kevin M. Biglan of the University of Rochester, New York and colleagues report in the July 10th issue of Neurology.

Dr. Biglan feels this study "is important because it makes physicians aware that somnolence, edema, and hallucinations are common in Parkinson’s disease patients and should not be overlooked as potential complications of treatment. This is the first time a patient’s other health problems have been identified as a risk factor for drowsiness," he added. 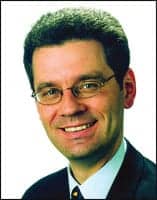