The hearing industry has pioneered a number of advanced technologies, usually involving tiny electronic transistors, receivers, and button-cell batteries. But now the industry has also become known for pioneering something big—330 feet big.

In late November in New York City, Widex was recognized by the United Nations (UN), the wind energy industry, and several influential organizations as one of 15 global companies at the forefront of harnessing and using wind technology as a primary energy source for its headquarters, including production. At the press conference that officially launched the new WindMade standard and labeling program, Widex Manager Richard Tøpholm was included in a panel of experts who explained why clean, renewable, wind energy not only makes sense from an environmental perspective, but also is an effective way to reduce operational costs for medium-to-large manufacturers around the world.

Getting Off the Grid

Widex’s 330-ft windmill outside its world headquarters and manufacturing plant near Lynge, Denmark, helps generate more power than the company needs—reducing its CO2 emissions by 2,000 tons per year.

It’s not completely accurate to say that Widex’s new manufacturing headquarters near Lynge, Denmark, is “off the grid”; in fact, the Widex facility is expected to generate more power annually than the company needs, and therefore will transmit energy back onto the grid for the benefit of the local community. Prominent among its many energy-saving features—which include an advanced geothermal heating/cooling system and solar panels—is the 330-foot windmill that generates 3.4 million kWh of power, reducing the company’s CO2 emissions by 2,000 tons a year. (For information on Widex’s “green” headquarters, see the article in the April 2011 HR.1)

We’ve all read labels and advertising informing us that a product is organic, eco-friendly, fair trade, etc. But what do these terms really mean, and who defines them?

The WindMade Standard for Companies and Organizations is designed to place stringent stipulations and definitions on the term “WindMade,” and then allows companies complying with the standard to use the new branding label in its marketing. In order to qualify for the WindMade label, a company must source a minimum of 25% of its electricity consumption from wind energy, along with other renewable energy sources such as solar and geothermal. Importantly, the standard also includes third-party verification by PricewaterhouseCooper, which takes into account the electricity footprint, as well as the renewable energy source.

The UN and other major organizations highlighted Widex’s substantial commitment to clean energy, which the company says was made possible by its worldwide customer base of hearing care professionals. Other organizations taking part in the media event included the World Wildlife Fund (WWF), Global Wind Energy Council, and the Wind Energy Foundation.

“WindMade is the first consumer label ever endorsed by the UN Global Compact,” said Lila Karbassi, GM/environmental leader of the UN Global Compact, an organization that calls on companies from around the world to align their operations with 10 universal principles in areas that include human rights, labor, environment, and anti-corruption. “WindMade is truly aligned with our mission, and it promotes greater corporate sustainability, which is a critical contribution that businesses can make.

“We are convinced that WindMade can be a transformative force,” continued Karbassi. “It can help companies clean up their energy consumption, and these types of market-based solutions that lead to greater investments in renewable energy are highly appreciated—especially in a context where government and financial institutions are looking for the right mechanisms to address climate change…So today we are proud to recognize the pioneers who have stepped up and those first corporations to be certified by the program.

“WindMade is a fantastic opportunity for progressive sustainable brands to drive change on behalf of consumers,” said Karbassi. “We really believe it can go a long way. It can capitalize change and help expand the use of renewable energy around the world.”

Steve Sawyer, secretary general of the Global Wind Energy Council, a trade association representing the wind industry, offered an historical perspective on worldwide efforts to put a global price on carbon and to “help level the playing field and allow renewable energy to compete directly with fossil fuel and other conventional energy.” Sawyer characterizes the global debate on carbon emissions as being at a “nexus between science and politics” that is currently failing both the business world and the general population. Although global initiatives, such as the 2005 Kyoto Protocol and the 2009 UN Climate Change Conference, have failed in creating government policies that reduce reliance on fossil fuels, Sawyer says that a private-sector approach to changing energy policy remains viable.

“WindMade gives us the perfect opportunity not only to change the practices in companies [but also in] countries,” said Sawyer. “I would like to thank our friends at Vestas [Wind Systems] for getting this off the ground … and I especially thank these pioneers for showing the way so we can make things work and bring about the kind of change we need—because we really need change, and the time to rely on our governments to do this is long, long past.”

Marty Spritzer, director of US Climate Policy for the World Wildlife Federation, said, “[Today’s event] is really about the pioneering companies and their leadership. And, although we’re celebrating the new WindMade label and its launch, we’re also celebrating the leadership of these pioneers who are showing the way for others.”

Spritzer says that, even if you don’t believe in climate change, there is ample reason to throw your support behind renewable energy—particularly wind power. “These investments help countries become more independent, energy-independent, and secure,” he said.

“It also turns out that consumers want to be part of the solution,” continued Spritzer. “Surveys show people want to buy products that are made with renewable energy, and [the WindMade label] can make it easier for them to do that. One thing we know about consumers is that they have a lot of power, especially when we make it easy for them [to effect change]…The WindMade logo recognizes companies that have made investments in wind energy, and gives the public and policy-makers confidence in these companies’ claims. This label fills a gap between the consumers and industry, allowing the companies to communicate transparently and with confidence.”

In an interview with HR, Wind Energy Foundation Executive Director Darlene Snow noted that Widex was honored as a pioneer because it is an exceptional company utilizing wind energy. “They are unique,” says Snow. “They have really made an investment—literally—in the ground and with the turbine. They are a family business that has been around for a long time and, while they’re not a small company, they’re also not a giant. [What Widex has done] is they’ve been able to show that wind energy fits in any industry.”

Snow believes Widex sees the bigger picture. “You wouldn’t typically think of a hearing aid company as having a sustainability mission or having a wind turbine,” she says. “How does that help their marketing? It’s largely a business-to-business company, and what they do is mostly invisible to the general public. So, I think this shows that they’re doing this from the inside out. Widex is clearly driven by a culture and commitment to doing business in a certain way. And this is just one extension of that culture. 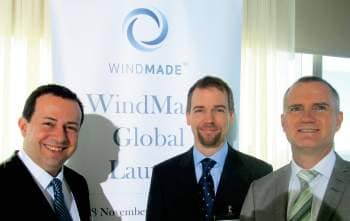 Representing Widex at the WindMade Global Launch were (l to r) James Cola of Widex USA, and Richard Tøpholm and Peter Hentze Knudsen of Widex A/S. The new WindMade logo is in the background.

“What we really liked about [the selection of Widex] as one of the 15 pioneering companies is that it validates the idea that you don’t have to be a wind-energy company, or a Walmart, Whole Foods, Starbucks, or any of the companies traditionally marketed as being ‘green’ or having ‘green’ products. Widex shows that [WindMade] is applicable for any industry that has a commitment to a clean and better future.”

Most of the speakers at the media event praised the WindMade pioneers as being “courageous,” but Tøpholm demurred by citing the business and economic issues behind wind energy. “When considering scale, wind-generated power is very efficient, plus it obviously appeals to consumers,” he said. “So, I think there will be a lot of adopters similar to our company’s size. In fact, it’s really hard to find arguments against WindMade. It just makes a lot of sense on so many different levels and, really, it’s a question of the time spent thinking about it, designing it, and putting forth the effort.”

He explained that the purchase and construction of the wind turbine outside of Widex’s world headquarters may pay for itself within 12 years, depending on electricity costs. In view of constantly fluctuating oil prices, renewable energy also adds one more component of stability to a company’s bottom line. “I don’t think it really costs a lot of money [when you consider the savings],” says Tøpholm. “It did cost a lot of management time, thought, and effort.”

He says that, at first, many people thought they were joking about erecting a giant windmill. “But, for a company like ours, I think this was the right choice.” — KES

Time to Vote for the 2011 Oticon Focus on People Awards 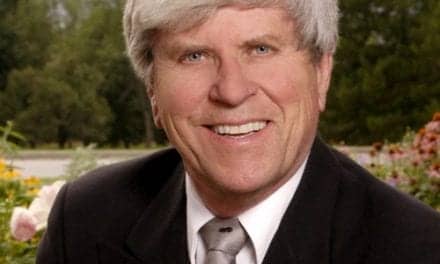 Capitalizing on Opportunities in Hearing Care: An Interview with Garry Gordon