Auctioning off of ALD frequency bands contested by hearing care proponents
Washington, DC— The Hearing Industries Assn. (HIA), Self Help for Hard of Hearing People Inc. (SHHH) and the Alexander Graham Bell Assn. (AG Bell) have been meeting with the Federal Communications Commission (FCC) in an effort to save the 216-220 MHz bandwidth, which is widely used by assistive devices, from being auctioned off to the private sector.

The agency was directed by the Balanced Budget Act of 1998 to auction off parts of the communications spectrum controlled by the government to private users, and the 216-220 MHz portion was included that group. According to HIA, this band is currently open to limited entities like law enforcement and data telemetry, but power limits for these users are low because there is risk of interfering with Channel 13 which operates just below 216 MHz. The low power limits of the band have made it an attractive region for assistive listening devices to operate without the interference that was often encountered in the 72-76 MHz band ALDs previously shared with higher-powered services.

The Balanced Budget Act of 1998 mentioned nothing about ALDs, and it is thought that Congress did not know which bands were being turned over to the FCC for auction and that the 216-220 MHz bandwidth is vital for the operation of assistive devices. HIA, SHHH and AG Bell are developing comments to submit to the FCC opposing the auction and educating lawmakers on the negative consequences that the auction of these frequency bands would have on ALD users and the hearing-impaired community, particularly children.

Audiologists gear up for AAA meeting in San Diego
McLean, VA — The American Academy of Audiology’s 13th annual convention and exposition will be held April 19-22 in San Diego. This year’s event is expected to draw more than 8000 audiologists, exhibitors and students to the four-day event.

As one of the premiere events in the hearing care field, the AAA convention will offer attendees over 100 instructional courses, and 35 featured sessions. Research poster exhibits and podium presentations, pre-convention workshops (April 18) and special events will also be featured, according to the Academy. Additionally, an estimated 185 exhibitors will be displaying new products and services on the convention floor (see the AAA convention preview on pgs. 56-63).

“I think the excellent program we have planned in combination with all the wonderful things that San Diego has to offer will give us our best convention yet,” says Gail Gudmundsen, convention 2001 chair.

For more information on the AAA convention, visit the Academy’s website (www.audiology.org/convention) or contact AAA at 800-AAA-2336.

Amplifon plans IPO on Italian stock exchange
Milan — Amplifon SpA, the Italian hearing instrument distributor and owner of Dahlberg/Miracle Ear, has announced its intention to sell shares in an initial public offering (IPO) during the first half of 2001, according to Bloomberg news service (Feb. 26). As owner of one of the world’s largest retail hearing instrument dispensing chains, Amplifon is reported to have had sales of $304 million in 2000, and has spent $80 million on six acquisitions in the last three years. The company has 1600 sales outlets and 2500 client assistance centers that employ 3000 people.

Amplifon plans to use money from the IPO to concentrate on expansion and acquisitions, particularly in the U.S. and France, according to CEO Giovanni Martino Rollier. They also plan to expand in current markets, and to open outlets in Germany and Poland. The company also distributes hearing instruments in Spain, Portugal, Switzerland, Austria, Holland and is the major distributor of hearing aids in Italy.

The educational meeting was highlighted by workshops on the latest technology for helping those 50-million Americans who suffer from tinnitus. General sessions included updates on the recent advances in digital technology and software, the Siemens’ Pocket CONNEXX™ hand-held programmer and the company’s ALDs.

Following the educational meeting, many attendees extended their stay and enjoyed several Siemens-sponsored events and tours of the island of Kauai.

AuD degree reported by AFA to boost earnings of audiologists
West Lafayette, IN — An AuD audiologist may earn significantly more than an audiologist with a masters degree, according to an article by Larry Engelmann, AuD, which was published in Torchbearer (Winter 2001), the newsletter of the Audiology Foundation of America (AFA) which is devoted to advancing the AuD degree as the standard for audiological education.

According to Engelmann, the median income for practicing AuD audiologists is $61,300 for the first year and $67,100 for the second year, compared to $33,600 and $34,292 for MS audiologists respectively. These income levels compared favorably to those of podiatrists ($57,714 and $64,715) and optometrists ($60,100 and $61,747). The income statistics were drawn from professionals who have 1-30 years experience in their respective professions.

Engelmann notes that U.S. Bureau of the Census (1998) data indicates that average income for all occupations and professions (at all experience levels) are: $52,771 for a masters degree; $79,346 for a PhD and $93,714 for a professional degree.

According to the same issue of Torchbearer, results of an AFA survey of 63 AuD graduates in Fall 2000 indicated that AuD recipients believe the AuD currently (or in the future would): help them expand services (75%), increase their status with patients (95%), increase their ability to market (90%), increase status with colleagues (89%) and help in gaining referrals (82%). However, fewer respondents said it would help them get a better position (20%) or earn more money (33%).

Helix Hearing Care sponsors new lab at National Centre for Audiology
Montreal — Helix Hearing Care of America Corp., a manager of 144 hearing care clinics in the U.S. and Canada, has entered into a strategic agreement with the Univ. of Western Ontario to develop a Health Services Research Laboratory at the newly created National Centre for Audiology. The company’s contribution will help establish the Helix Health Services Research Lab at the Centre, and its contribution will be matched by the Canada Foundation for Innovation (CFI) and the Ontario Innovation Trust (OIT). Five new research labs and additional researchers at the Centre have been provided by corporate and individual donors, as well as CFI and OIT.

The National Centre for Audiology has been created to educate clinical audiologists, provide advanced instruction for students, and continuing education for practicing audiologists and international specialists. It also conducts research to improve the assessment and treatment of people who have hearing loss, as well as provides clinical hearing care.

“We are honored to have Canada’s largest hearing health care company contribute to this initiative,” says Angelo N. Belcastro, PhD, dean of the Faculty of Health Sciences. Steve Forget, president and CEO of Helix Hearing Care says, “We are proud to sponsor this project with the Univ. of Western Ontario. Our industry is entering into a period of rapid expansion and the necessity to access qualified resources is becoming an increasing priority.”

Today co-host Matt Lauer interviewed audiologist Lori Hanin of the New York League for the Hard of Hearing for about four minutes on hearing loss and related subjects. Hanin pointed out that 1-in-4 people age 65 and 1-in-3 people age 75 have some type of hearing problem. She noted that people with hearing loss often complain about the TV not being loud enough or that people mumble, and she adeptly covered topics including new hearing instrument technologies, digital instruments, smaller styles of instruments, as well as the cost aspects of a hearing aid.

The Hearing Industries Assn. (HIA) said that Hanin provided “a superb example of the kind of public information we as an industry need to disseminate.”

FastForward is reportedly an intensive computer-based training program designed to “train the brain” to learn faster, according to the company. Part of the program reportedly uses a “speech stretching” algorithm that manipulates sound signals in real-time to aid subjects’ skills in identifying speech components (e.g., sharp/short consonants). 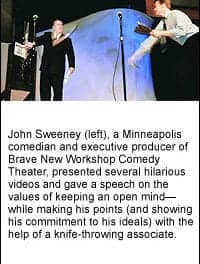