The year spanning 1987 and 1988 was Mead Killion’s Annus Mirabilis (Latin for “Wonderful Year,” and English for an amazing year for the field of audiology). He came out with the ER-15 Musicians’ earplugs, insert earphones (ER-3A) for more accurate assessment of hearing thresholds, the K-AMP circuit that was the world’s first high fidelity hearing aid technology, and an article with Larry Revit, based on some of Larry’s master’s thesis work. The article was called “Insertion gain repeatability versus loudspeaker location: You want me to put my loudspeaker WHERE?”1

As the article name suggests, Killion and Revit wanted to examine the repeatability of insertion gain measures as a function of angle of incidence of the loudspeaker and of the angle of elevation of the loudspeaker. Years before, E.A.G. Shaw, who was then at the National Research Centre (NRC) in Canada, had exhaustively studied the characteristics of the sound pressure levels that were developed around the human head; the first valid estimates of the “ear canal resonance” or REUR came from the work of Shaw.2 I was just entering my undergraduate in mathematics and actually met Shaw for the first time when he gave a guest lecture to my class—the seminar was over my head, but then again, I was only 18 at the time! (We still had grade 13 at that time in Ontario, Canada, and I had flunked grade 3.)

But back to Killion and Revit (1987)1—their results were also over my head, but this time only by an angle of 45°. Actually, it was Larry’s idea to try 45° after having examined Shaw’s angular sensitivity of pressure. Shaw had presented data that certain angles of presentation of a signal were more susceptible to variability than other angles.

Figure 1. Killion and Revit’s figure,1 showing the standard deviations as a function of frequency at different loudspeaker locations. An orientation of 45° to the side and 45° above the subject has the lowest variability, especially for higher frequencies.

Figure 1 is adapted from the original Figure 5 from Killion and Revit’s 1987 publication. It shows the (within subject) standard deviation for 5 subjects at 0°, loudspeaker directly in front of the subject; 45° off to each side; 45° elevated above the subject; and then directly above the subject from the ceiling (90°). The directly above 90° measure resulted in a “shoulder bounce” meaning that there was constructive interference between the incident sound and the early reflection off of the shoulder back to the ear—other than assessing shoulders, this loudspeaker location should not be used. The 45° to the side and 45° above the subject location (45°, 45°) is quite a different story.

Since this article came out, I have always suspended my loudspeakers at this angle. The improvement is dramatic: the standard deviation is 1 dB or less, at least up to 3000 Hz. With a larger sample size than that used in Killion and Revit,1 the standard deviation would be even less. This is doubly startling when you consider that insertion gain is a “difference” of two measures (aided – unaided or REAR – REUR), each measure with its own variance.

Figure 2. Fifty randomly selected subjects with attenuations measured with a probe-tube measurement system for the ER-15 uniform attenuation musicians’ earplugs. (Data from clinical files at the Musicians’ Clinics of Canada.)

Another measure that is a difference between two probe mic measures is the attenuation of hearing protectors. Figure 2 shows the real-ear attenuation of 50 musicians wearing the ER-15 musicians’ earplugs, along with the standard deviations (small blue and red x and o). These data were obtained from my clinical files from the Musicians’ Clinics of Canada.

Not only does Figure 2 show the appropriate flatness of the musicians’ ER-15 earplugs, but these data could only have been obtained with the 45°, 45° loudspeaker orientation reported by Killion and Revit in 1987.1 The variability of the data would have been much greater, especially in the higher frequency region, with the loudspeaker being in a more “conventional,” but less than optimal, 0°, 0° location.

Original citation for this article: Chasin M. You want me to put my loudspeaker WHERE? Hearing Review. 2014;21(9):14. 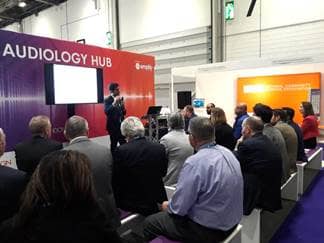