The Role of Hearing Loss in Late-life Depression

Clinicians need to be mindful of the need to recognize the interactions that occur between hearing loss, depression, and cognition and to counsel their patients accordingly—particularly when making recommendations for hearing aids.

Clinical depression has been referred to as the “common cold” of mental illness. Statistical figures on the incidence of depression are staggering. It is estimated that 1 out of every 5 Americans will experience an episode of depression at some point in their lives. The total number of individuals suffering from depression in the United States currently exceeds the 18-million mark.

Not surprisingly, the elderly comprise one of the largest segments of the clinically depressed population, particularly among those living in institutional settings. Given the prevalence of hearing loss, its interactive nature, and the myriad problems it is known to produce, it is reasonable to assume that the role of hearing may well be an exacerbating factor or even a contributing cause of depression in the elderly population.

Clinical features. Depression is characterized as a disorder of mood and is defined as a persistent state of sadness accompanied by feelings of pessimism, negativity, diminished self-worth, and loss of hope. The symptomatology is extremely complex and variable from patient to patient. Depressed people may differ from one another by the number, pattern, and severity of their symptoms. The phenomenology of depressive experience may be broken down into four general categories: affect, behavior, cognition, and physical function.

Affect. Depression is defined as a disorder of affect, as abnormal mood, or affect, is the defining feature. Although diminished mood or dysphoria is commonplace, irritability and anhedonia (the inability to experience pleasure from activities usually found enjoyable, eg, exercise, hobbies, etc) are also common.

Cognition. Many have called depression a disorder of thinking as much as a disorder of mood. Depressed people are typically negativistic in their view of themselves, their world, and their future. Patients typically feel helpless in terms of managing their lives and resolving their problems.

This is particularly true in terms of the elderly, wherein disordered brain function and cognitive impairments such as problems in concentration, reasoning, and memory are hallmarks of depressive syndromes.

Physical symptoms. Patients may demonstrate loss of appetite, decreased energy, fatigue, and irritability. Sleep disturbances are a hallmark of the disorder, with an overwhelming number of patients reporting some manner of sleep disruption.

Behavioral symptoms. Most patients withdraw from social activities as well as limiting participation in activities once regarded as pleasurable. Psychomotor changes may include a general “slowing down” of physical movements, or, conversely, increased motor activity such as fidgeting if depression is accompanied by anxiety.

Taxonomy of major depressive disorder. The formal criteria for a diagnosis of major depression include depressed mood and a loss of interest or pleasure in ordinary activities for at least 2 weeks, followed by at least 4 of the following symptoms:

Dysthymic disorder. This is a less severe but longer lasting form of depression. Dysthymia is a depression that exists “more often than not” over a 2-year period. Due to its chronicity, dysthymia is considered more difficult to treat than major depression.

Based on recent statistics, it is estimated that the world’s older population will show a threefold increase over the next 50 years, from 606 million people today to over 2 billion by 2050. As people live longer, it is the older segments of society that will show the most dramatic increase, with an almost 5-fold increase occurring during the same period of time. The most recent study called the National Comorbidity Study reported the current rate of depression at 4.9%—or about 1 in 20 individuals. These estimates do not include individuals with chronic low-grade depression, which falls short of diagnostic criteria.

Depression is generally regarded to be the most common psychiatric disorder among the elderly, although recent evidence suggests that anxiety disorders may actually be more common among this population. Data from community-based studies conducted on patients in institutional placement or with disabilities such as Parkinson’s, Alzheimer’s, or dementia reach as high as 50%. Furthermore, since depression typically begins in adolescence or early adulthood, the rates of depression are actually somewhat higher in younger age groups.

The close relationship between depression, physical illness, and dementia presents problems for epidemiological investigation. A significant number of the elderly may experience dementia or high levels of physical illness, which may mask clinical presentation of depressive symptoms. These and other issues influence the prevalence and incidence rates reported in epidemiological studies, and, if anything, underestimate the number of individuals affected.

Despite the fact that depression is highly prevalent and easy to detect, numerous studies found a markedly low rate of detection in clinical settings. This can be explained by an age bias and the stigma associated with mental illness, which discourages patients from reporting symptoms. This “understandability phenomenon” or “fallacy of good reasons” is the notion that depression in older people is somehow to be expected and is a “normal part” of aging. As hearing care professionals know all too well with regard to the acceptance of hearing loss, these misconceptions do a grave disservice to the elderly by lowering expectations in both providers and recipients of care.

Most of the literature indicates that primary care physicians and general practitioners are not able to recognize signs of depression in the elderly population—particularly when it occurs in the context of multiple health problems. The failure to identify depression or to treat it effectively can undermine treatment efforts concerning other coexisting conditions. All of the research indicates that untreated depression is associated with poor outcomes, resulting in prolonged morbidity and increased utilization of health care resources.1

Although clinical depression may be a patient’s only diagnosis, depressive symptoms often occur in a shifting pattern of comorbid diseases and illnesses that are developmentally related. In addition to hearing loss, depression also may exist in the context of medical conditions such as diabetes, hypertension, heart disease, and stroke. In elderly patients, neurodegenerative diseases, such as Alzheimer’s and Parkinson’s disease and dementia, are linked with increased frequency of depressive symptoms. This interrelationship between depression and other variably expressed coexisting disorders makes differential diagnosis, as well as determination of cause and effect, difficult.

Most of the studies examining the relationship between hearing loss and depression do so within the context of quality of life, which is a multidimensional concept encompassing the social, affective, physical, and cognitive domains. If the hearing loss is longstanding, we can expect that most individuals will experience some degree of emotional and social isolation, which in turn may affect quality of life, mental health, and general wellness. An assortment of earlier studies have provided evidence of an association between hearing loss and depression, but correlations are not consistent, and in fact conflict when the role of hearing loss magnitude is taken into account.2-6 Most of the evidence presented seems to suggest that emotional disturbance of more than a transitory nature occurs with hearing loss, and that it is reduced when treatment is rendered.2,4,7,8

In addition to depression, there is a significant correlation between uncorrected hearing loss and cognitive decline. Of particular interest are the studies that have examined the relationship between changes in sensory function (vision and hearing) with age and reduced intellectual and cognitive function.9,10 Sensory function is seen as a strong predictor of cognitive function in elderly people. The model presented by a number of authors suggests that age-related differences in cognitive function are so strongly related to sensory function that age in itself plays a relatively subordinate role. If this is indeed the case, it is a very strong argument for early detection and fitting of hearing aids.11 As we have seen in research with Alzheimer’s patients, hearing loss exacerbates difficulties with speech comprehension, as the necessary cognitive reserves required for compensatory strategies are not available.10 The more auditory information that is made available, the greater the likelihood that an impaired cognitive system will be able to process it effectively.

Clinicians need to be mindful of the need to recognize the interactions that occur between hearing loss, depression, and cognition and to counsel their patients accordingly, particularly when making recommendations for hearing aids. The following key points should be kept in mind:

The author would like to acknowledge Nicole Hemsley, Director of the Amsterdam Free Library, for her valuable assistance in securing journal articles and reference material.

A Quiet Revolution in Hearing Care 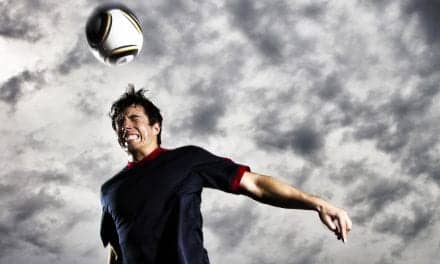 Soccer Headers May Be Linked to Increase in Balance Problems